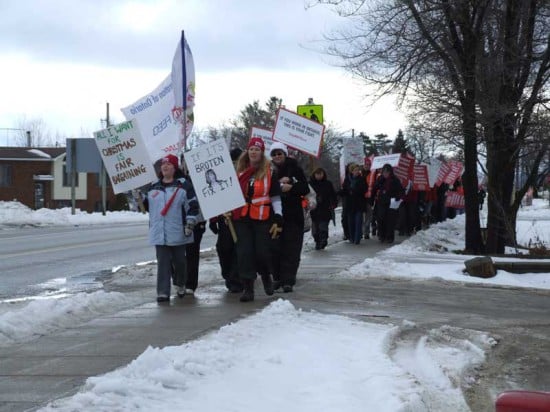 LITTLE CURRENT­––Honking horns provided a cacophonous backdrop score to union chants and reworked Christmas carols as striking teachers, occasional teachers and dedicated early childhood educators took to the streets of Little Current to voice their displeasure with Bill 115 and the McGuinty government.

“What this strike is all about is that our democratic rights have been stripped by the government of Ontario,” said Val Duhaime of Elizabeth Bay, president of the Rainbow Occasional Teachers’ local. “We have been negotiating with the government for some time now, but the ministry has stopped that. Teachers said that they would accept a two-year wage freeze. This has nothing to do with money. This has nothing to do with our sick days.”

Ms. Duhaime asserted that teachers want Bill 115 repealed, a sentiment they share with many of Ontario’s school boards. “About half the school boards in Ontario have told the government that they want the same thing,” she said. “They have told the government that the provisions of the memorandum of understanding will make it impossible to run their schools efficiently.”

If school boards are unable to run their schools efficiently, then the shortcomings that come out of that inefficiency will have to fall on the students. “It’s bound to hurt the kids,” said Ms. Duhaime.

The teachers and their education allies carried signs, chanted, blew whistles and horns and sang as they marched back and forth between the Little Current Recreation Centre and the corner of Highway 6 and Meredith Street. The contingent appeared to contain most of the Island’s teachers, building a dense column that stretched a considerable distance along the highway.

“There is a much larger demonstration taking place in Sudbury today,” said Ms. Duhaime. “The other union leaders are at that one.”

Ms. Duhaime characterized the dispute with the provincial government as a reaction to the first wave of an assault on the rights of union workers. “They say this is all about the deficit,” she said. “If they want to save money, let’s look at the power plants they shut down, let’s look at the waste of this government. Instead, they go after teachers and nurses. They are going after us first, but they (nurses and other public servants) are going to get it too.”

“We didn’t create the deficit,” said Ms. Duhaime. “Why do we have to solve it?”

The striking teachers had provided the promised 72 hours advanced notice of the one-day job action on Friday afternoon.

“We apologize for any inconvenience this may cause,” said Director of Education Norm Blaseg. “We thank parents/guardians for their patience and understanding.”

Although classes were cancelled and parents advised to make alternate arrangements for the care of their children, the communicate also advised that children currently registered in child care at Rainbow District schools could continue to do so as most childcare services would continue to operate.

The job action at the Rainbow District School Board was to be duplicated at six school boards across Ontario yesterday (Tuesday), creating a ‘Super Tuesday’ of strike events, with 300 schools being closed.