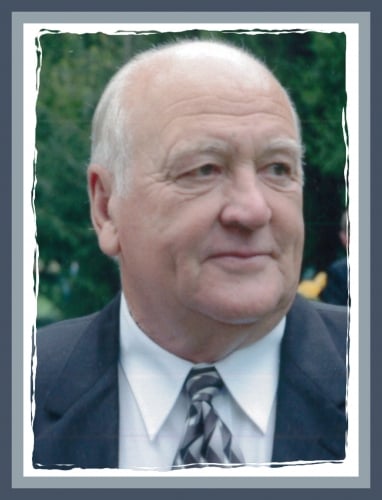 RALPH STANLEY MCNEIL BATMAN
December 21, 1929 – April 18, 2020
Ralph Stanley McNeil Batman passed away peacefully at the Manitoulin Centennial Manor on
Saturday, April 18, 2020 at the age of 90. Predeceased by his wife Frances Batman (nee Ferguson). Loving father of Dennis of Sudbury, Paul
(predeceased) (Jackie) of Little Current and William (Cheryl) of Sault Ste. Marie. Grandfather of Rebekkah (Brian), Matthew, Phillip (Erica), Kyle (Leeann) and Cory (Rhonda). Great-grandfather of Andrew, Ashton, Brandon, Bryce, Griffin, Evie and Maible.
Predeceased by his siblings Ruth (Harold) and Gerald and siblings-in-law Doug Ferguson, Patricia (Harold) Clark, Ruth (Roy) Dunlop and Wilhelmine Batman. Ralph Batman was a lifetimeresident of Sheguiandah and thoroughly
enjoyed a long and happy life on Manitoulin Island. Ralph worked a number of jobs as a young man driving the mail truck, trucks at the quarry, a labourer at Manitoulin Gardens, a tinsmith assistant and other scarce jobs in the 40s. In 1950 he trained under Ruddy Jolly and soon opened Batman’s Plumbing and Electrical. He was an excellent tradesman who developed a wealth of skills through the years. Later in life he started Batman’s Trailer Park and worked
timelessly to expand the business each year and achieve a huge success. When retiring at 69 he thought he’d like to do it all over again and even better. Ralph was an extremely
social man who thoroughly enjoyed running a business that exposed him to so many people from near and far. Ralph and Frances (Ferguson) were married at 21 years of age and built a small home on the Batman Homestead in 1950.
Raising three sons was their number one priority and they made an outstanding parenting team. Ralph could never do enough for his sons right up to the very end. Hard work and a positive attitude allowed him to meet success in all of the goals and challenges he faced in life. Ralph always had a well thought out plan ahead of time whether it involved
marriage, family, work, the unexpected or pleasure. In his retirement years he spent hours socializing with the people of Manitoulin, especially at many auctions. In recent years he and Deanna attended as many church and community dinners and events as possible. We often wondered where he got all of his energy and enthusiasm. His family was
fortunate to spend his 90th birthday with him in November when he was still in good health and could enjoy their
company to the fullest. Ralph was blessed with a long and rewarding life because of his social skills, good health,
positive attitude and dedication to hard work. So many
people have recently commented on what a gentleman he has always been. We shall miss him dearly and remember him well. A private visitation was held at Island Funeral Home on Tuesday, April 21, 2020 followed by a private family interment. A memorial service will be arranged at a later date. Donations may be made in Ralph’s honour to
Daffodil Terrace in Sudbury, Canadian Cancer Society or Manitoulin Centennial Manor Auxilary. Arrangements entrusted with Island Funeral Home.