“We were planning this for the last six weeks. We put together a rollout plan and gave it to our leadership, and they accepted it two weeks ago,” said Roger Beaudin, M’Chigeeng Health Services manager, as the clinic concluded on Thursday afternoon, March 4. “It went so smooth. There was no glitches whatsoever and we had really good teamwork.”

The First Nation received authorization for 312 doses of the Pfizer-BioNTech vaccine the week before the clinic and on the morning of the second day it received an extra dozen doses for front-line health care workers.

Those in line to get vaccinated, besides the community’s older members and front-line workers, included Wiikwemkoong health care workers, Manitoulin Health Centre workers who missed the earlier round and members of Ontario Provincial Police and UCCM Police.

A lot of work went into preparing the community-level vaccination plans. M’Chigeeng leadership sent out a survey to all community households to assess whether they wanted to get the vaccine, did not want to get the vaccine or were undecided.

This helped both to confirm numbers but also offered public health workers an opportunity to focus on the undecided people and share information about the shot or answer questions that may have been holding them back, to make sure they made an informed decision either way.

Mr. Beaudin said only a small number of people refused the vaccine and some who had declined on Wednesday decided to get their shot after all on Thursday.

Mr. Beaudin said 70 percent of community members older than 55 got the shot.

Everyone got an appointment time for their vaccination to avoid lines. Upon arrival, they signed in and underwent a screening before moving to a cubicle for their shot. Seats were spread around the community complex for people to wait after their vaccination so health care workers could monitor for any possible adverse reactions.

M’Chigeeng Health Centre nursing supervisor Leah Migwans said her teams had been working day and night the week before the clinic to ensure it was ready to go.

“It was a good learning experience. We’ve had nothing but positive feedback,” she said.

Mr. Beaudin said the vaccination itself was an easy experience.

“It was painless; I was looking forward to it. It’s all about protecting our community, families and elders,” he said.

M’Chigeeng Ogimaa-kwe Linda Debassige did not respond to requests for comment about her community’s first mass vaccination clinic.

This week, the Island First Nation vaccinations continue with clinics in Wiikwemkoong, Mnaamodzawin-led visits to its member First Nations and Noojmowin Teg’s sessions for off-reserve Indigenous people in the Manitoulin and Espanola area. All are by appointment only and for people 55 years old and older.

The Expositor was in contact with Mnaamodzawin Health Services to learn more about its vaccination rollout plans but did not receive details by press deadline Monday.

Noojmowin Teg’s rollout is the only current one in the area that requires people to book their own appointment. Indigenous people aged 55 and older living off-reserve in the Manitoulin and Espanola area should call 705-368-2182 and press 2 to book their time slot.

Wiikwemkoong was slated to begin distributing the Pfizer-BioNTech vaccine to its community members aged 70 and older today, March 10.

“Our nurses have been busy from the health centre, contacting as much people as possible here in the community to advise them (if) they are considered high risk and they meet the criteria that’s been set forward for the vaccination program,” Wiikwemkoong Ogimaa Duke Peltier said in a Facebook Live address last Friday, announcing the plans for this week’s vaccination rollout.

After the Wednesday clinic, Thursday will allow community members aged 65 and older to get the shot, followed by a clinic for those aged 55 and older on Saturday. Everyone who is eligible will receive a call from band administration to set up an appointment; individuals do not have to call the health centre.

“Chi-miigwetch to everyone for your co-operation,” Ogimaa Peltier said.

He stressed that despite the vaccinations, people must still follow public health guidance such as wearing masks, maintaining distance and only travelling away from home when absolutely necessary.

This is partly because a large portion of the population has not developed immunity to the virus either though contracting COVID-19 or getting a vaccine. In addition, almost all of the vaccines in Canada require two shots—one does not get fully protected until a few weeks after getting their second dose.

Naandwechige-Gamig Wikwemikong Health Centre posted a question-and-answer video on its Facebook page this past Monday, offering information on common concerns about the vaccine.

April 13: One new case of COVID-19 in Manitoulin District 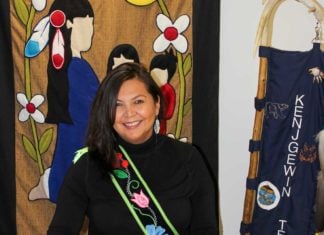