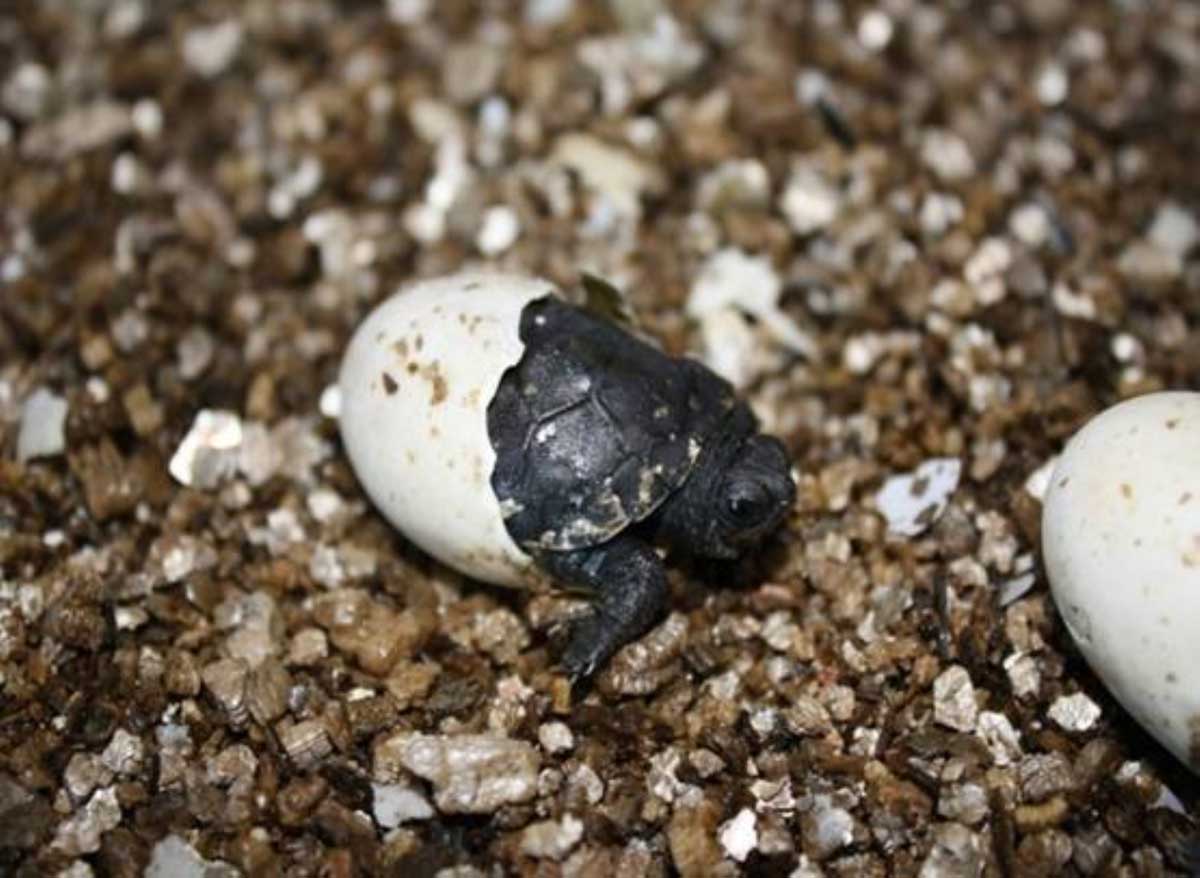 MANITOULIN—There are eight species of native turtles in Ontario with all eight considered at risk federally and seven of those considered at risk provincially. The number one threat to turtle mortality, besides habitat loss, is road mortality. Most cases that end up at both the Ontario Turtle Conservation Centre (OTCC) in Peterborough and Turtle Pond Wildlife Centre in Val Caron are due to road injuries. It’s ramping up to be a busy year.

“It’s probably going to be our busiest year yet, but I attribute that mainly to an increased awareness,” said Dr. Sue Carstairs, executive and medical director for OTCC. “We do quite an extensive education program so we’re always getting the word out. Most of our cases came from around Peterborough 10 years ago. They now come from all over the province and we have quite a network of volunteers throughout the province to help get them to us. It’s doesn’t mean that more are getting hit, just that more are getting saved, I think.”

The OTCC sees about 1,000 or 1,500 cases per year from all over Ontario. They can replace many of those back to their home wetlands and can incubate about 5,000 to 6,000 eggs a year, with the babies from those returned to their mother’s wetland. In its first year of operation, Turtle Pond took in 189 turtles and in its second year the number was about 250. Every year that increases, Ms. Morissette said. “We’re having a significant impact. Turtle Pond is the only centre north of Parry Sound so the need is there.”

Most turtles arrive at rehabilitation centres following road injuries but injuries have also occurred as a result of fishing by-catch, boat or boat propellor collisions, beaver or other traps and predation attempts. “The majority of injured turtles do end up healing well and being released,” said Dr. Carstairs. “Every one we can get back out there is vital. Their life history is such that every single adult is important to the population because so few of them make it to adulthood.”

Rehabilitation has such a positive impact on stabilizing local turtle populations because of their low reproduction rates. It takes a snapping turtle 50 years or more of laying eggs to produce one offspring that will reach a breeding age, Ms. Morissette said. “Just by returning one breeding adult back into a local population can stabilize that population. Studies have shown that rehab does have an effect on stability.”

Turtle Pond’s veterinarian has already done three surgeries this year, she said. “The turtles come in to here so broken. Often I can save a turtle myself but sometimes the pieces are really displaced and need surgical intervention. The before and afters are just amazing.” She has an additional five or six turtles right now that don’t require surgery and will be returned home shortly. Some turtles require a longer rehabilitation. “This last one is bad,” said Ms. Morissette. “It is going to be at least a two-year rehab. They vary in duration of stay.”

Turtles can survive from massive injuries that other species cannot so very rarely is there a case that’s beyond hope, said Dr. Carstairs. “Even if it is beyond hope, a lot of the times it’s a female carrying eggs and we can at least save her offspring to be put back into her home wetland. Any turtle is worth contacting us for. Even if it’s a male the data that we collect is so important to us too and that goes directly to projects that are working on these mitigation strategies so every turtle will add to conservation, even if it’s not alive.”

Eggs are placed in an incubator and hatch at the end of summer. Overwintering hatchlings increases their survival rate by about 30 percent, Ms. Morissette noted. “If you release them as hatchlings they have only about a five percent chance of survival.” The incubator at Turtle Pond is almost full even though it’s early in the season. Right now, they have three clutches of snapping turtle eggs that are over 30 eggs each, a clutch of Blanding’s with 14 eggs and two clutches of painted turtles which have from six to eight in each clutch. Hatchlings that are overwintered are being released at this time of year. “We were just out Manitoulin way last week releasing turtles,” she said.

One of Turtle Pond’s criteria, as per its mandate with the Ministry of Natural Resources and Forestry, is that babies be released within about 15 km of where they came from. “With turtles specifically, whenever we get an injured turtle, we ask very specific questions about where the female was located and we return those offspring to her home territory,” Ms. Morissette said. Turtles will often visit the same nesting area year over year to lay eggs.

In the natural order of things, turtle eggs feed a lot of species and a lot of species feed on them. “Nest protection is one thing that can increase the odds of survival of those eggs,” said Dr. Carstairs. In Ontario, it’s allowable if it’s on your own private property. If it’s on somebody else’s property or on Crown land you do have to get permits for it. OTCC sells premade nesting boxes but instructions for making nesting boxes are available on their website. “It has to be done properly or else you can do more harm than good. The temperature of the nest is very important. It determines the sex of the baby so you don’t want to disturb the temperature of the nest and you also want to make sure that there’s access for the babies to escape when they hatch. Otherwise they’re just sitting ducks for predators.”

If someone finds an injured or recently deceased turtle, the best thing to do is put them in a box or a dry bin as long as it can be done safely. Never give an injured turtle food or water, advised Dr. Carstairs. “That’s very important because often they have fractures in their shell and (the water) will leak right into their body cavities so if you put them in water they can actually drown. So, no food, no water and usually when they’re hit they’re pretty easy to handle.” Remember to wash your hands after handling any turtle as they can have bacteria on them that’s not harmful to them but can be harmful to humans.

Once the turtles are safely in the bin, call the OTCC hotline (705-741-5000) or Turtle Pond (705-691-0433). OTCC can help get that turtle from anywhere in the province to their centre. They have a network of veterinarian first responders who are trained by OTCC and can provide initial emergency care. There are 40 throughout Ontario which means there’s usually one within an hour anywhere in the province. “We also have a network of over 800 turtle taxi volunteers and they will help get the turtle either directly from the people who found them to us or via first responders,” said Dr. Carstairs.

Turtle Pond is a smaller facility and doesn’t have the resources to pick up injured turtles. “I rely on people to bring them to me,” said Ms. Morissette. She utilizes community Facebook groups and often there are local people who are willing to provide transportation. Turtle Pond does receive injured turtles from the Island each year, mostly painted turtles but also the common snapping turtle, she said.

“Solving the problem is the goal and that involves the construction of eco-passages, culverts under the road and fencing to lead them through those culverts under the road so they don’t get hit. There are hundreds of those projects going on across the province but sadly, it’s never going to completely fix the problem. I think the key is public awareness and education for sure,” Dr. Carstairs said. “There’s really no downside to turtles. They don’t do anybody any harm. They only do good. It is one species where the numbers that we see in the hospital and that we release have a true population impact because so few of them make it to adulthood. They really have to live a long, long time to even have a hope of replacing themselves in the population.”