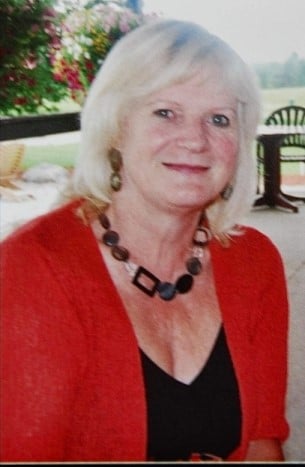 SANDRA SUSAN MERRYLEES
November 10, 1954 – June 1, 2020
Sandra Susan Merrylees passed away suddenly at Health Sciences North on Monday, June 1, 2020 in her 66th year. Beloved wife of Darwin “Red” Merrylees and cherished mother of Donald Merrylees. Grandmother of Matthew and Megan Merrylees. Sandy will be sadly missed by her brothers-in-law Hal Purkey, Delbert Merrylees; sisters-in-law Marlene Burns, Barbara Blue, Carol Bahnuk and Audrene Merrylees. Nieces Kim (Kenny) Orford, Lynn Delany, Lee (Bob) Chatwell, Lorie Burns and nephews Michael Purkey, David (Joanna) Purkey, Kenny and Linda Lehman. Also remembered by her extended family and friends. Predeceased by her parents Chester and Kathleen (Lehman) Burns, brother Stewart Burns, sister Donna Purkey, brother-in-law Curtis Merrylees, Gary Blue; sister-in-law Audrey Merrylees, Roger Delany, father and mother-in-law Cecil and Dorothy Merrylees. Sandy was born in Mindemoya on November 10, 1954 and grew up in Gore Bay. Sandy married Darwin “Red” Merrylees on February 11 1974 in the Gore Bay Courthouse. They moved to Lively that same year as Red started full time at INCO and Sandy started at the Toronto Dominion Bank in Lively. Sandy and Red had one child, their son Donald was born at the Mindemoya Hospital in 1974. Red and Sandy lived in Lively for 30 years while raising their son, but Sandy’s true love was always the Island. After 30 years with TD, Sandy retired and returned back to Gore Bay to join her husband (Red) who retired the year before. Sandy was very athletic growing up playing many sports, although sportsmanship and having fun were some of her best qualities, she had a fierce competitive side. Sandy played basketball, baseball, golf, curling and downhill skiing. She even played baseball on the Sudbury travelling team, the Sudbury Sonics, when she first moved to Lively. Sandy’s favourite sport became curling. She was a member of the Copper Cliff Curling Club and Idylwylde Golf and Country Club . Once retired, she became heavily involved with the Gore Bay Curling Club. Sandy was crucial in acquiring funds through government grants and local investors in order to pay for a new and much needed ice making system. She was also heavily involved in helping run bonspiels and booking the club for private venues. Sandy was always trying to think of new ways to retain the current members but also to get “young people” interested in curling. Sandy’s love of curling had her travelling all over the world and making amazing lifelong friends. Sandy also loved to travel. Whether Red was willing or not, she was adamant on travelling to as many places as she could. She travelled often with her sister Donna, family and close friends. She travelled to all parts of the world, from the East to West Coast of Canada, throughout the United States and even as far as Europe. She loved adventure and would be up to doing just about anything. She even whitewater rafted the Grand Canyon with family. Recently her main travelling companion was lifelong friend Mary Lynn McQuarrie. They went on many travelling adventures together including a “Thelma and Louise” parody trip in a convertible Camaro from Gore Bay all the way to her sister’s home in Arizona. Family was very important to Sandy. Although she was younger than both her siblings, she was very close to them and their children. Her brother Stu’s children were not much younger than she was and were brought up more like sisters. She was very close to her sister, Donna, even though she moved away from the Island at a very young age. Sandy was constantly visiting her sister in Chicago, Greenwich, and Phoenix. Sandy and Red only had one son, but seemed to have raised six or seven boys from Donald’s group of friends. They were always at the house or camp, like the brothers he never had. If you were to ask them, they would admit that she was like a second mother to all of them. Her pride and joy was the love of her grandchildren, Matthew and Megan. Even though she retired back to the Island shortly after Matthew was born, Sandy seemed to be at everything they did. She went to hockey and ringette tournaments, volleyball tournaments, graduations, birthdays, you name it she was there. She loved spending time cooking, baking, water skiing, downhill skiing, seadooing and four wheeling with the both of them. Most of Sandy’s time was spent in their house in Gore Bay and out at their camp on Tobacco Lake with her husband Red and their dogs Gunner and Carley. She had a great life living in paradise in two beautiful places that were near and dear to her heart. She loved a full heart and lived a full life and if she was here to ask she would probably tell you that she wouldn’t change a single thing. Cremation has taken place. A Celebration of Life will be held at a later date. Memorial donations may be made to the Gore Bay Curling Club, (this can be done by e-transfer to GoreBayCC@gmail.com) or the Canadian Cancer Society as expressions of sympathy and may be made through www.SimpsonFuneralHome.ca.