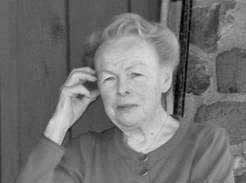 In loving memory of Sheila McMullan, of Perivale Gallery, Spring Bay, Manitoulin Island, who passed away peacefully at Mindemoya Hospital on Saturday, October 20, 2012 at the age of 86 years. Daughter of the late Charles and Florence (Sproule) Wilson, in Limerick, Saskatchewan. Sheila graduated in Interior Design from the University of Manitoba in 1948 and began her career in Thunder Bay, where she met her late husband, Robert Eric McMullan. After raising their family in Sudbury, Sheila and Bob retired to their Manitoulin summer home, and, inspired by Sheila’s vision, Perivale Gallery was born. Sheila and Bob owned and operated Perivale Gallery for many years. After Bob’s death, Sheila continued to operate the Gallery, sharing her knowledge and expertise. Greatly respected by all who knew her, her legacy of artistic inspiration will live on. Her Gallery was her life. Sheila was a woman of great strength, grace and perseverance, whose vision guided many and will continue to inspire through her vibrant and indomitable spirit. Sheila was predeceased by her beloved husband Robert Eric McMullan on November 14, 2001, her son Roderick McMullan (1975), her sister, Moira Vine (1984) and brother, F/O Kevin Wilson (1943). Sheila will be greatly missed by daughter Shannon McMullan (Bill Viertelhausen), granddaughters Meghann Darroch (Michael McCourt) of Ottawa and Erin Kergen (Tyler) of Airdrie, Alberta, and great-grandson, Connor McCourt. Sister of Garrett A. Wilson, Q.C. Regina, Saskatchewan. A gathering of friends to celebrate Sheila’s life will be held on Friday, October 26, 2012 at 11 am at Culgin Funeral Home, Gore Bay. If so desired, donations to the Mindemoya Hospital Auxiliary (by cheque only) would be appreciated. Online condolences may be left at www.culginfuneralhome.ca. Culgin Funeral Home, Gore Bay, 705-282-2270.