﻿MINDEMOYA—Six benches have been donated toward the A.J. Wagg Memorial Park.

“It’s gorgeous in the park and the trails and these benches will enhance this,” stated Marcus Mohr, a member of the A.J. Wagg Memorial Park trail committee and community development/outreach coordinator for the municipality of Central Manitoulin. “It’s just incredible. Other places would kill for a park like this in the middle of town.”

Mr. Mohr explained, “we had six benches donated to the park. We have two six-foot benches and four four-foot benches. Two benches have been installed already, the first donated by Jake’s Home Centre in memory of Kevin “Jake” and Don Mackan, and the second bench donated by Madeleine Wagg Becks. She is the fifth of five children born to A.J. and Effie Heron Wagg.”

Mr. Mohr explained that the Love family of Cedar Cove Farms, with the inscription ‘Pioneers Since 1884,’ has donated one of the six-foot benches. “Two benches have been donated by the Island Animal Hospital with the inscription ‘Rest and Enjoy the Beauty of Nature,’ and the second ‘Love Comes in Fur and Paws.”

A sixth bench has been donated by Finn’s Gas Bar, in M’Chigeeng. “Finn’s has been looking to give back to the community as they have received so much support from our local community,” said Mr. Mohr.

“We are currently assembling the remaining four benches for installation,” said Mr. Mohr. He explained, “all of the benches are plastic, made from recycled milk jugs.” All the benches are being installed on the accessibility trail, so they are accessible to everyone.

Mr. Mohr said, “we also had a geologist in, Brenda Koziol, with her husband, to identify features of the park. Ms. Koziol is an interpretive science expert and they identified geological features for interpretive signage. We are waiting on that information before we lay in the alvar trail.”

“We have a trail committee and John Diebolt and Dale Scott, along with Marcel Beneteau who was the president of the Manitoulin Nature Club, were all instrumental in getting the park and trail in, along with Wendy Wiggins, Al Tribinevicius and Katie Gilchrist,” added Mr. Mohr.

The municipality acquired the parkland in the 1990s and A.J. Wagg, for whom it is named, is remembered for establishing Wagg’s Creamery in Mindemoya and serving as reeve of the municipality for over 10 years. 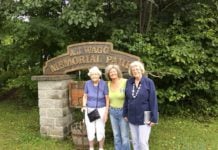