PROVIDENCE BAY—Earlier this month, ‘The Spawning Grounds,’ the latest novel by Gail Anderson-Dargatz and published by Penguin Random House Canada, was launched with rave reviews and a spot on must-read lists the country over. While set in the Shuswap region of British Columbia, this book has an Island connection, as much of it was written in Providence Bay—the summer home for this award winning author.

“Anyone who has spent time on Manitoulin knows that special ‘Island’ feeling–that sense of peace that settles over you,” Ms. Anderson-Dargatz tells The Expositor in an email interview. “Everything slows down on Manitoulin Island. It’s that ‘Island time’ we all talk about. In other words, Manitoulin Island is the perfect place for a writing retreat and that’s one of the main reasons why I was drawn to the Island in the first place (and why writers come to the Providence Bay Writers’ Camp!). It’s simply easier to get into the zone on Manitoulin, to relax and focus, to create.”

“It’s also the case that a great many writers need to leave the landscape they write about in order to write about it,” the author continues. “My stories take place largely in my home country, the Thompson Shuswap region of British Columbia. But the landscape of my novels is an imagined landscape, a very imagined landscape, as I rely heavily on magic realism elements in most of my stories. So over the decade it took me to write ‘The Spawning Grounds,’ I wrote much of it–perhaps most of it–over the summers we spent on Manitoulin Island. I felt much freer there to imagine my home landscape, to write the fictional landscape that I needed to carry the narrative.” 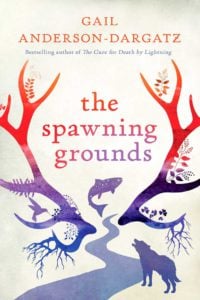 “I make a habit of waving and smiling at anyone who walks along the board walk at Providence Bay, as all locals do, but I’ve heard back from some of my neighbours who say that on days when I’m working out writing problems as I walk, I’ve walked by them without noticing,” Ms. Anderson-Dargatz adds. “So I offer my apologies to my Providence Bay neighbours for the future. If you see me zoned out like that, I’m not being rude, just lost in thought. My husband calls it my “writers’ face.” I do a lot of my writing walking up and down that boardwalk!”

In writing ‘The Spawning Grounds,’ Ms. Anderson-Dargatz says she was interested in the shifting boundary lines between our worldviews and reality, “between our manmade landscapes and the natural world, between past and present and between our Settler and First Nations cultures.”

“In the novel, there is a river that divides these two communities,” she adds. “But for many of us—especially those of us who live rural—the boundaries between our communities are not so distinct; our communities are intertwined and often supportive of one another. That’s the case where I live in the Shuswap, just as it is on Manitoulin. But its also the case that no matter where we live in Canada, we live with a terrible history that we’re only beginning to acknowledge. As the Truth and Reconciliation Commission report pointed out, that past is alive and right here with us, staring at us. As a country we are finally bringing that history to the table, talking about it. That’s good, a starting place. Mostly, though, I think those of us from this side of the river need to stop talking and really listen to what our First Nations communities have to say.”

‘The Spawning Grounds’ precis on the Penguin Random House website states: “On one side of the river is a ranch once owned by Eugene Robertson, who came in the gold rush around 1860, and stayed on as a homesteader. On the other side is a Shuswap community that has its own tangled history with the river—and the whites. At the heart of the novel are Hannah and Brandon Robertson, teenagers who have been raised by their grandfather after they lost their mother. As the novel opens, the river is dying, its flow reduced to a trickle, and Hannah is carrying salmon past the choke point to the spawning grounds while her childhood best friend, Alex, leads a Native protest against the development further threatening the river. When drowning nearly claims the lives of both Hannah’s grandfather and her little brother, their world is thrown into chaos. Hannah, Alex, and most especially Brandon come to doubt their own reality as they are pulled deep into Brandon’s numinous visions, which summon the myths of Shuswap culture and tragic family stories of the past.

“The novel hovers beautifully in the fluid boundary between past and present, between the ordinary world and the world of the spirit, all disordered by the human and environmental crises that have knit the white and Native worlds together in love, and hate, and tragedy for 150 years. Can Hannah and her brother, and Alex, find a way forward that will neither destroy the river nor themselves?”

Ms. Anderson-Dargatz has been published worldwide in English and in many other languages in more than ﬁfteen territories. Her latest book, ‘The Spawning Grounds,’ is her first literary novel since the 2007 bestseller ‘Turtle Valley.’ Her first novel, ‘The Cure for Death by Lightning,’ met with terrific acclaim and was a finalist for the prestigious Giller Prize. This international bestseller also won the UK’s Betty Trask Award, the BC Book Prize for Fiction and the VanCity Book Prize, and was a finalist for the Chapters/Books in Canada First Novel Award. Gail’s second novel, ‘A Recipe for Bees’, was again a finalist for the Giller Prize and was nominated for the IMPAC Dublin Literary Award. A Rhinestone Button was also a bestseller and her first book, ‘The Miss Hereford Stories,’ was a finalist for the Leacock Medal for Humour.

After nearly a decade of teaching within the Optional-Residency MFA program in creative writing at the University of British Columbia, Ms. Anderson-Dargatz now mentors writers around the world through her own online forums. She also hosts the Providence Bay Writers’ Camp for adults from her summer home on Manitoulin Island.

For the rest of the year, the author lives in the Shuswap in south-central British Columbia, the landscape found in so much of her writing, with her husband Mitch Krupp and their family. For more, please visit her website at www.gailanderson-dargatz.ca. Or follow her on Twitter @AndersonDargatz.

‘The Spawning Grounds’ is available wherever Penguin Random House books are sold.