GORE BAY—They had a party and it seems like everyone showed up!

Split Rail Brewing Company held a birthday party last Friday evening and to say that a lot of people showed up would be a huge understatement. The patio was filled with people sitting and standing, while the inside of the building was packed with people in line waiting to buy Split Rail refreshments.

“This is our third year birthday and we are in our fourth year of operation,” stated Eleanor Charlton, who is co-owner of Split Rail Brewing Company along with Andrea Smith.

The first three years, “have been good, we started off slow and low key with a super small system and have grown and expanded since we first started,” said Ms. Charlton.

This year Split rail continued its expansion. This year’s expansion represents more than a doubling of Split Rail’s current production capacity and is critical to meeting the demand for Split Rail products on the Island and beyond. This expansion also allows for more flexibility and diversity in product availability.

Split Rail staff posed for a photograph of the birthday cake before it was served to all those in attendance at Friday’s party. 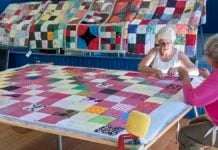