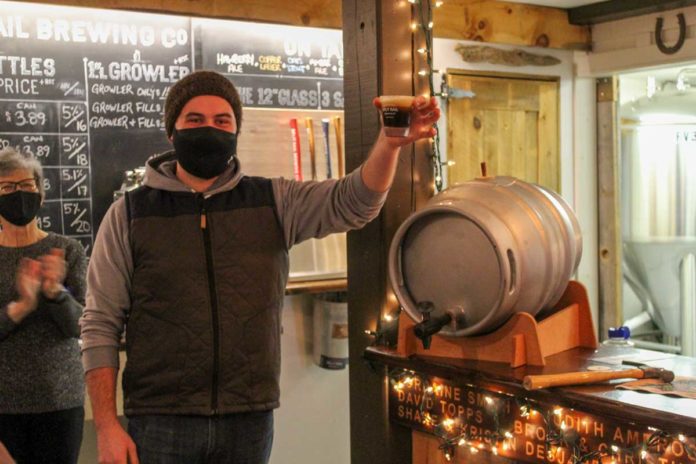 Ms. Smith explained the Loon Song Oat Stout “is a very smooth, luscious velvety beer because of the oats. It has hints of coffee and molasses in it. It is very drinkable and enjoyable,” she explained, noting, “with this beer, some customers will say they don’t usually like heavy dark beer, but they like this one.”

“My mother is not a beer lover, and my sister loathes stout beer, but they both like this one,” stated Ms. Smith. Barret Campbell, head brewer said, “We are proud to have received the bronze award for our Loon Song Oat Stout. It is all thanks to the great efforts of our Split Rail family and the continued support of our community. We look forward to continuing to make great beer on Manitoulin, and to further honing our craft.”

Ms. Smith explained, “Sadly, we are almost out of our Loon Song oats supply. Loon Song Farms, some of your readers might remember, moved from Little Current to southern Ontario in 2017. They are still making stellar local flours from their new location but going into 2023, they are no longer producing oats. We will miss this connection with Loon Song Farms and our search is beginning for a new local supplier of oats for this product. Supporting the local economy and local producers is foundational to Split Rail’s values.”

Accepting the award for Split Rail was Rob Lanktree. “Rob is one of our brewers (along with Barret Campbell), who lived in Toronto for a couple of years, and is a former teacher and a former paramedic,” said Ms. Smith. She added the award was presented the last weekend in November in Toronto. Mr. Lanktree and his two children were in attendance and he accepted the award on behalf of Split Rail.

Split Rail will be holding its second annual ‘Cask Opening Party’ on Saturday, December 10. This ticketed special evening features the launch of a limited run cask-conditions ale. Guests will be treated to the official ‘tapping of the keg’ with charcuterie from New Grain Kitchen and dessert from Finnia Chocolate and Cacao.