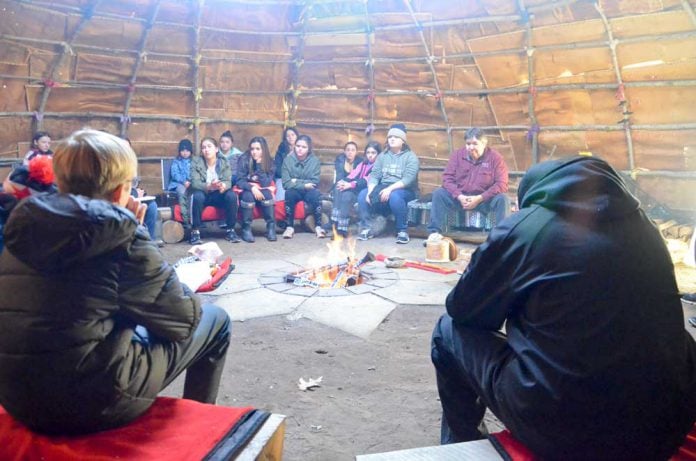 M’CHIGEENG—With elders Josh Eshkawkogan and Roberta Oshkabewisens as guides, Little Current Public School (LCPS) Grade 7 and 8 students set out on a journey of discovery into the spiritual world of the Anishinaabe during a recent visit to Kenjgewin Teg Educational Institute (KTEI).

The partnership between the Kenjgewin Teg elders and LCPS marks a signal departure from the way Indigenous history education has been delivered in Rainbow District School Board schools.

Students arrived at the birch bark teaching lodge nestled behind the KTEI M’Chigeeng campus and settled in around the fire while Carrie Anne Agawa sang a welcoming song and explained the important role of the drum and song in Anishinaabe culture. “It is like a prayer,” she said. “You could compare it to something like grace.” The welcoming song she sang was one of welcome to the grandfathers (mishomis), grandmothers (nokomis) and Great Spirit (G’Chi Manitou).

Mr. Eshkawkogan began the session by noting that what he was about to impart to them was his own interpretation of the culture and traditions of his people and that others might have slight variations, but each person’s beliefs were not ascendant on anothers. “We do not force our beliefs on others,” he said, but added that there is a willingness to share them freely to those with open minds and hearts.

The medicines that are sacred to the Anishinaabe, focussing in particular on the four most common, sema, tobacco; giizhik, cedar; muskodewusk, sage; and 1, sweetgrass. The elder focused during this teaching primarily on sema (tobacco).

Sema acts as a connection to the universe and the elder suggested that each participant compose a short prayer to themselves before placing the sema in the fire, carrying with it the prayer skyward as it burned.

Mr. Eshkawkogan noted the star symbol pattern in the stones surrounding the fire and the same pattern repeating in the ceiling surrounding the vent at the top of the traditional birch bark wigwam that forms the teaching lodge. The star pattern is also often seen in ceremonial blankets and gifts presented to dignitaries and those being honoured.

The elder explained the seven directions: up, down, within the self and the familiar eastern, southern, western and northern doorways.

Following an admonishment to take three deep breaths and to concentrate on their prayer, each participant was passed a talking stick and took turns introducing themselves to the group by name and community (with the Anishinaabe students and participants including their clan or dodem in their introduction) before depositing the pinch of sema they had grasped in their left hands, and then travelling around the fire in a clockwise direction as the smoke rose skyward.

The essential elements of world around us, fire, wind, water and earth, form key aspects of the Anishinaabe worldview, noted Mr. Eshkawkogan.

The first fire, the sun, is essential for life and is the breath of the Creator, while the second is lava, evident in volcanos. Among the various fires is the eighth fire, and Mr. Eshkawkogan admonished the students to look up the YouTube video published by author Wab Kinew on the importance of the eighth fire for the future. The third fire is lightening, which plays an important role in the creation of eagle staffs and the fourth fire comes from within oneself. “When you are upset or depressed, we say that your fire is low,” said Mr. Eshkawkogan.

The role of the firekeeper in Anishinaabe society is extremely important, noted the elder. “That is the role of the men,” he said. “The firekeeper keeps the fire going through the night for a family who has lost a loved one. The fire provides a light for the spirit of the departed to go towards.”

To be a firekeeper requires keeping a good life, free from alcohol or drugs. “You want to bring good energy with you,” he said. “Always have a pinch of tobacco to place with the wood on the fire.”

Elder Oshkabewisens explained some of the feminine roles in Anishinaabe culture, focussing on water and strawberries. She related a story from her own youth that centered on the gathering of berries. Her grandmother would send her out to collect the various berries as they each came into season, admonishing her to not eat even a single berry as she went about her work. The chore taught her patience and the discipline of self-denial; putting off her natural inclination to an immediate gratification so that the later reward of jams, tarts and pies could be realized.

Two female students volunteered to assist the elder in distributing strawberries and water in a ceremony following her talk.

In the second part of their journey of discovery, the students learned a little bit about the sweat lodge, with Mr. Eshkawkogan explaining the selection of “the grandfathers” especially selected stones that provide the heat for the sweat lodge. Each grandfather can only be utilized once, as they tend to crack and shatter from the heat. Care must be taken in the selection of the stones to be aware of their chemical composition and to ensure that they are not likely to explode when heated.

The two-hour session necessitated brevity. “It doesn’t take two hours to learn how to be Indian,” laughed Mr. Eshkawkogan. “It takes a lifetime.” But the students were invited to return to learn more another day and to explore the world of the Anishinaabe in their everyday learning as well.

Following the teaching and sweat lodge sessions, the students were invited into the main KTEI building for a feast of chili and scone dogs before boarding their school bus and returning to the classroom.