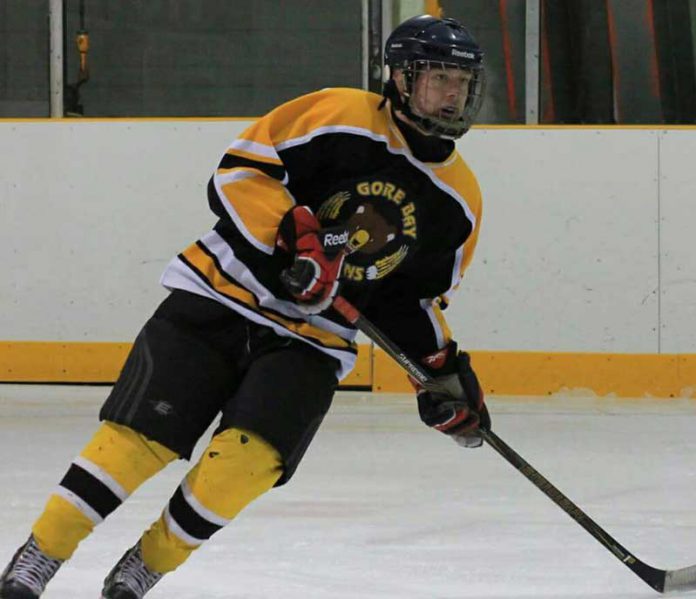 GORE BAY—Dan Dickinson of Chicago may not be from Manitoulin, but international borders hold no bounds when you are trying to save a life.

Mr. Dickinson and his wife have been spending their summers in the North Channel for 27 years. This summer, while on holiday, they learned that a youth they had gotten to know at the Gore Bay Marina, Connor Croft, was in need of a kidney transplant.

“I received a liver transplant in March of 2011,” explained Mr. Dickinson. “I also founded Transplant Village and part of our mission is to help those needing a transplant procure a living donor. We have been very successful in the past, so I reached out to Connor and his mom.”

Connor, a first year student at Loyalist College in Belleville, found out last year that he had kidney failure.

“Last December Connor got a concussion during a high school hockey game (Connor played for the Manitoulin Secondary School Mustangs),” said Connor’s mom Jeanette Mercer. “After he was doing better, we visited the doctor trying to get him returned to play and found out that he had high blood pressure.”

The low blood pressure led to further tests and it was discovered that Connor had kidney failure.

“We have never had an official diagnosis of why he has kidney failure, but at that time we were told that he was young and healthy and he wouldn’t have to be on dialysis yet.”

After the Christmas break, bloodwork revealed that Connor’s condition had worsened and he began dialysis.

“He now undergoes nine hours of dialysis every day,” said Ms. Mercer. “He also carries fluids throughout the day, which makes things difficult for him. He’s up and down a lot and tired all the time.”

“He (Connor) didn’t want to talk about it before,” said Ms. Mercer. “He didn’t want to beg people to donate a kidney. When Dan (Mr. Dickinson) came along, he said ‘you don’t have to beg, I’ll help you find one.’ This is the first time he has accepted help.”

Mr. Dickinson acts as a champion for individuals in need of an organ and reaches out to people through social media and other outlets to help find them a living donor.

“Social media is really successful,” said Mr. Dickinson. “My most successful case had 12 people tested and found the perfect donor and six of the others went on to donate to someone else.”

He explained that his daughter was a living kidney donor for a stranger and started a chain of transplants saving six lives.

“She wanted to be a part of a change,” said Mr. Dickinson. “To do something to change lives.”

Mr. Dickinson has created a Facebook group for Connor, ‘A Kidney for Connor,’ as part of his efforts to find a living donor.

“We thought we had found one but the person got tested and it didn’t turn out,” explained Mr. Dickinson. “I’ve talked to 12-15 people, but there are a lot of things that can disqualify someone. Thankfully in Canada you can look at a few donors at a time.”

Mr. Dickinson said that often people in need of an organ are like Connor and feel badly asking for help.

“It’s hard asking someone to put themselves at risk,” he said, “but there is a joy of giving too. Giving allows you to save someone’s lives—maybe more than one. When I talk to living donors after, they say that it is the most significant thing they have done in their life—it changes their life.”

Ms. Mercer said that Connor is also on the deceased donor list, but she isn’t sure where he ranks on that list.

“He has been on the list in London (Ontario) since last year,” she said. “They said that it was going to be a year to a year-and-a-half, but it has been over a year now. Toronto told me that the wait list there is seven years, so I just don’t know. A living donor would be the best possible option for everyone. It would also give Connor the best chance at accepting the kidney.”

Mr. Dickinson is confident that he will find a living donor for Connor.

“I am very optimistic that we will find him a kidney,” said Mr. Dickinson. “People want to be a part of something bigger than themselves—living donors save lives.”

A fundraising hockey game is being organized by his former hockey teammates on January 12.

“Connor is touched that people are organizing this hockey game for him,” said Ms. Mercer, who noted that they hope to attend but it is weather dependent as Connor would be travelling from Belleville.

Anyone interested in learning more about living organ donation can contact Mr. Dickinson at 847-274-6826 or dand@gascapital.com. For more information about Transplant Village, visit www.transplantvillage.org.