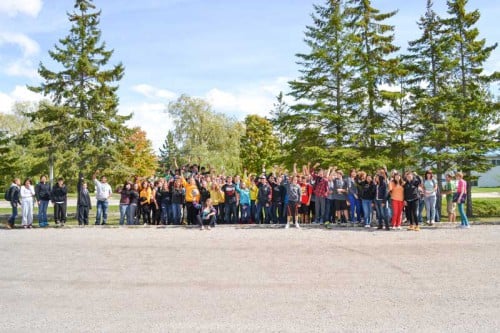 M’CHIGEENG—The provincial government’s passing of Bill 115, the ‘Putting Students First’ Act, which cuts wages, sick days and takes away teachers ability to strike, has led many teachers across Ontario to stop volunteering their time to extracurricular activities, something that Manitoulin Secondary School (MSS) students worry will soon affect them.

“Some have heard that the activities will only be taken away on Wednesday, some have heard they are going to be unavailable for good and the well-known truth is that either way they will somewhat be taken from us,” commented Grade 10 student Hanna Boyer last Friday, September 21 when Hanna, along with over 50 other students, did not return to class after lunch, rallying at the front of the school in protest to the possible loss of extracurricular activities.

“I understand that yes, the teachers are also upset because the bill (Bill 115) has been passed that has seized some of their compensations,” announced Hanna during her speech to the protesting MSS students. “I would be mad too if I was in their place, but I do not think that it is right for the Ontario Secondary School Teachers’ Federation (OSSTF) to tell the teachers to not give us, the kids, the joy to participate in some of the things we love to do.”

Hanna proceeded to ask those in the group to raise their hands if they were “looking forward to” playing a school sport this year or participating in a school club.

“We realize that not all teachers want this (to stop running extracurricular activities), but they have no choice because Bill 115 has taken away their right to negotiate, protest and strike,” continued Hanna. “I understand that there are things that are being taken away from you, the staff, but does that really mean you have to take it out on us the students? By doing this you are making us, along with you, victims of the government’s decision.”

The OSSTF is encouraging teachers to wear black on Wednesdays in a show of unity and protest against Bill 115, as well as abstain from volunteering their time to extracurricular activities once a week, while the Elementary Teachers Federation of Ontario (ETFO) has introduced ‘McGuinty Mondays’ in protest of the legislation, urging teachers to not participate in any school extracurriculars or school-based, system level or regional meetings.

While extracurricular activities have not come to a full halt yet at the elementary or secondary level, with teachers left without the right to strike the full stop of extracurricular may be the next step, something Hanna and other students at MSS join students across the province in being concerned with.

“Students across Ontario have been holding protests like this,” Hanna told The Expositor. “We realize they haven’t stopped yet, but that is the direction things could be going in and we don’t want that to happen.”

“I have no disrespect for the school or the teachers,” added MSS Grade 11 student Rachael Bilbija, “but we have a right to speak out against something we think is unfair and we need to do this before extracurriculars are taken away indefinitely.”

Though many of the students who attended the protest shared similar opinions to Hanna and Rachael, some left, opting to return to class and commenting that they felt the protest was premature.

“I’m proud of the students out here being strong and standing up for what they believe in,” commented MSS student Bailey Nerbus, “but right now there is nothing to protest.”

“Everyone here is entitled to their opinion,” added Liz Oswald. “I just feel that nothing has happened yet at MSS and until our extracurricular activities are actually taken away, there is no sense protesting.”