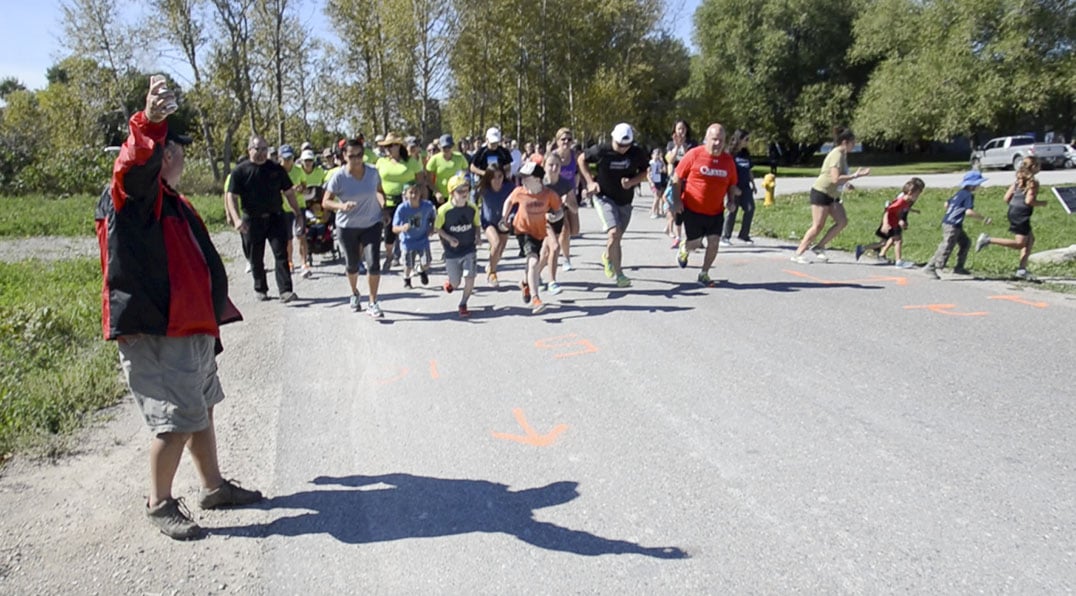 MANITOULIN— The weather was nigh onto perfect for the 35th annual Terry Fox Run for the Cure as supporters lined up at the starting line to run, walk and cycle in support of cancer research.

This year’s event in Little Current was held as usual at Low Island and featured a Zumba dance warmup for participants, a silent auction featuring many donated items, a colouring station and numerous hula hoops from Gazoo Hoops, along with plenty of healthy food and snacks and water to keep the troops’ energy up and well-hydrated.

Little Current organizer Joanna Rosenbaum reported that proceeds from this year’s event will likely exceed $5,000. “We have more than $4,600 in now and there are more pledges coming in today,” she said. “I think it is safe to say we will have raised more than $5,000 this year when everything has come in.”

One of the most popular items on the silent auction table was a curried chicken dinner (valued at “priceless”) prepared and served at your home by Northeast Town Mayor Al MacNevin. Mayor MacNevin also served as the official starter for the event, pulling an air-powered horn from his pocket to launch the runners off their marks.

As is traditionally the case, the Manitoulin Amateur Radio Club’s ARES (amateur radio emergency services) group was on hand to man checkpoints along the route and to ensure that the participants were kept safe and sound throughout the run.

Algoma-Manitoulin MPP Mike Mantha was on hand, complete with team MantaRays T-shirts (one of which he presented to starter Mayor MacNevin). Although Mr. Mantha begged off running (“I am a bit too curvaceous,” he quipped), the MPP did walk the route with a green-shirted team from M’Chigeeng First Nation.

A concurrent run in Silver Water organized by Jessica Sampson was blessed with the same clear blue skies and reported $1,315 raised and 18 participants.