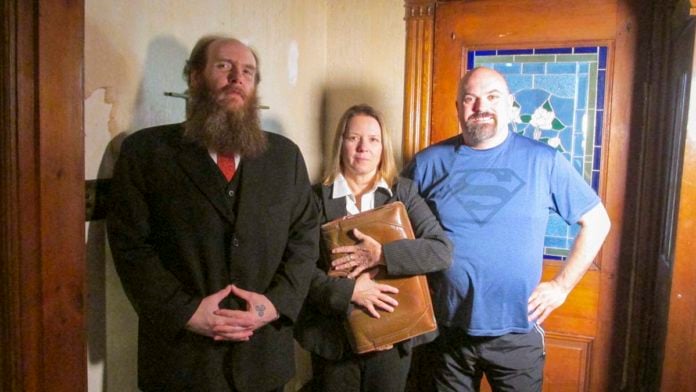 MASSEY—The short film-movie ‘The Philanthropist,’ which was partially shot in Gore Bay in 2018, has been nominated for several awards and it will be featured in a major film festival in Berlin, Germany.

“The Philanthropist’ is a film that keeps on impressing and is now heading back to Germany, featured at the Emerald Peacock Film Festival in Berlin,” said Dylon Whyte of Gore Bay (who plays the role of the philanthropist).

“Yes, our film is being featured in the festival taking place in Germany,” said Jayson Stewart of Lapse in Judgement Films and director and screenwriter of the film. “The film and our actors/actresses have been nominated for several awards.”

‘The Philanthropist’ was nominated for two awards in the Northern Ontario Music and Film Awards (NOMFA) in 2018, for the outstanding screenwriter award, Jayson Stewart, and the best short/mid length film through the NOMFA.

For his role in the film, Mr. Whyte won the best actor award at the Berlin Underground Film Festival in 2018.

Mr. Stewart had told The Expositor previously, “The story for this film had come as a dream and I knew I needed to do this film.”

Inspired by such cinematic aesthetics as David Lynch’s ‘Twin Peaks,’ ‘The X-Files,’ and Stephen King’s short stories, ‘The Philanthropist’ has been sent to film festivals around the world.

“I have always been attracted to surreal stories that peel back the pretty facade of reality and poke what’s there,” said Mr. Stewart. “Sometimes what you find is horrible and sometimes you find beauty and truth.”

The principal cast consists of four main actors: Heather Stevenson (Sudbury), Liliane Chretien (Sudbury, Autumn Buratynski (Espanola) and Dylon Whyte (Gore Bay). The three-way storyline focuses on three women as they plead their cases to a philanthropist (Mr. Whyte) and the audience is left to wonder, “will they walk away with their fortunes or never leave his office at all?”