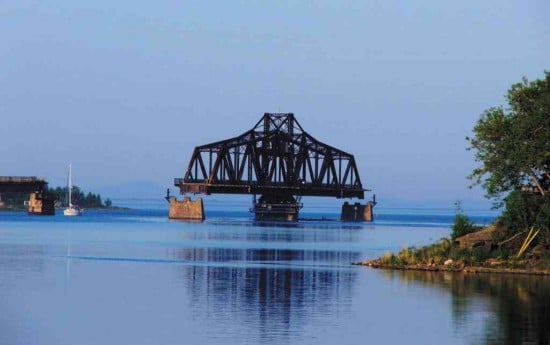 LITTLE CURRENT—2013 marks the centennial of the Little Current Swing Bridge and to commemorate the momentous occasion, communities and groups from across the Island are organizing events and activities themed around the historical bridge.

The Manitoulin Expositor has been publishing stories, and will continue to throughout the year, from readers sharing memories and stories about the swing bridge.

A book chronicalling the history of the swing bridge, ‘Bridging the Centuries,’ has also been published and is available at The Expositor office in Little Current and Turners of Little Current.

The main event of the year will be a bridge centennial celebration weekend from Friday, July 12 to Sunday, July 14.

The weekend will kick off with a ribbon cutting at the park by the bridge (next to the Manitoulin Tourism Association).

“There will be a ribbon cutting ceremony with dignitaries to commemorate the bridge and officially start the weekend celebration,” explained town economic development officer Kristin Luoma. “Following the ceremony, the Ticklebone Theatre Company will we doing vignettes, dressed in period costumes, telling historical and comical stories about the bridge. It will be a great chance for people to learn more about the history of the swing bridge and there will also be a photo opportunity.”

Later on in the evening there will be turn of the century music provided by the ‘Old Time Orchestra,’ as well as a wine and cheese social.

Saturday’s activities will focus around Little Current’s downtown area with a wide selection of attractions for the whole family to enjoy.

Ms. Luoma revealed that there will be an outdoor market of artisans and food vendors, a sidewalk chalk competition, a classic car show, a tugboat rendezvous and flotilla, an air demonstration and dinner theatre to cap off the day.

“The tugboat rendezvous will be a first for Little Current and should be really neat,” explained Ms. Luoma. “The events committee is expecting 30 to 40 tugboats which will be offering tours and providing information about their vessels. The Little Current Yacht Club will also be working with the tugboaters and other boaters to organize a flotilla through the North Channel.”

The bridge centennial celebration weekend will conclude on Sunday with a picnic at Low Island Park. The event will feature turn of the century games, music and entertainment. There will also be a 5K run on Sunday and a geocaching event.

“The town and the events committee are still finalizing some of the details, but it should be a great weekend and a lot of family fun for the community, the Island and visitors celebrating the swing bridge’s centennial,” concluded Ms. Luoma.

“We are still working with various Island groups to coordinate events,” explained Ms. Ferguson. “We are also working with a few other organizations on other activities scheduled throughout the year. We will eventually be producing a calendar with all the bridge themed events throughout the Island.”