The “Tour” was held last Saturday afternoon under sunny skies and hot weather.

“We had a great time,” stated Carolyn Lane Rock, one of the organizers of the event, which originated in 1991.

“We had 85 people on hand for the dinner,” said Ms. Lane Rock, who pointed out participants come from far and wide, this year from places like Luxembourg and New Jersey.

The event always begins with the launching of an arrow, which was carried out by nine-year-old Huddson Smith this year.

Previously, Ms. Lane Rock explained that she and her sister Gloria attended a jazz festival in Montreal years ago. It was after a parade that they attended there that they got the idea of making a large Sandhill crane using a javex bottle and holding an event like the Tour de Barrie Island.

The original Tour de Barrie Island held in 1991 included 20 bicyclists, with three Sandhill cranes sighted and a total of 29 people on hand for the dinner. 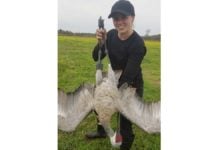 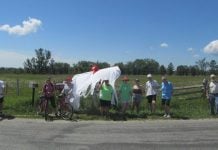