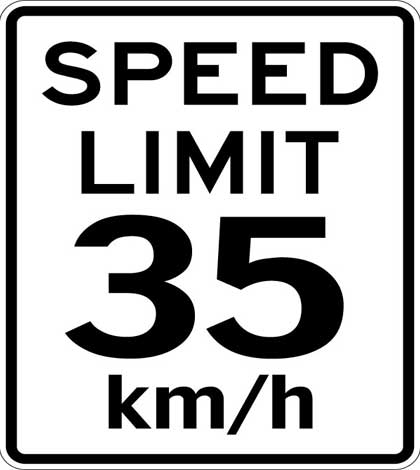 GORE BAY—Gore Bay council is taking action to curtail speeding by drivers on streets in its downtown area.

At a meeting last week, council considered a recommendation from its public works and properties committee on concerns that have been raised regarding speed limits on town streets. The committee recommended that the section of Meredith Street from the United Church to Charlie’s Corner garage be posted at 35 kilometres per hour, as well as for council to look into designating Water Street from Main Street to the marina a community safety zone (CSZ).

“I’m wondering if Phipps Street should be included as well?” asked Councillor Lou Addison. “This was the street I was most concerned about with drivers tearing up and down the street.”

Councillor Betsy Clark noted the committee had recommended that Meredith Street be 35 kilometres, but not designated a community safety zone area.

“Why not do all three streets, including Phipps Street?” asked Councillor Addison. “Traffic and cars are racing up and down the street all the time.”

Under a community safety zone, a bylaw is passed and if a person is charged with driving over the speed limit in one of these zones, the fines (laid by the police) are doubled, Ms. Clarke explained.

“All three streets should be designated community safety zones,” stated Councillor Addison. “All it takes is one or two people getting speeding tickets and the speeding will be reduced. This is where I see some action needing to be taken.”

“It is the Main Street that cars go flying down,” said Ms. Clark.

“We should include all of the downtown core,” suggested Councillor Addison.

Councillor Addison said she could not understand why the committee is picking only one street for the CSZ.

“Why don’t we do this for the whole town?” asked Councillor Harry VanderWeerden.

There is already a CSZ set up near C.C. McLean school, the meeting was told.

“I don’t think anyone disagrees with what Lou is saying, let’s just change it,” said Councillor Ken Blodgett.

“If it means the whole town becoming (a CSZ) will it mean anything to anyone if there isn’t any enforcement carried out on people speeding? What about the area (Main Street) near the nursing home, should it be included as well?” asked Councillor Jack Clark. “I feel putting in limits of 35 kilometres, and enforcement of the speeds will get what we want (on all three streets).”

“I’m thinking that if we don’t set up the community safety zones, the police may not want to pay as much attention,” added Councillor Addison.

“If it means the penalties will be more severe for people speeding, drivers will adjust, I know I will slow down,” said Councillor Addison. “These three main streets are the ones that have the most concentration of people and traffic.”

Councillor Blodgett stated, “the community safety zones slow people down, no matter what the speed is. To me it is not just designating the (CSZ) but the sign that slows me down.”

“I don’t know how anyone can be going at top speed down Phipps Street, that road is awful,” said Ms. Clark.

“Some of it is the black and white vehicles that go by,” Councillor Addison said.

Ms. Clark said she would like to see Water Street be a (CSZ), and the area from the LCBO store to the Twin Bluffs Restaurant.

“I just don’t understand why we aren’t including all three streets,” said Councillor Addison. “It only takes one person to get hit.”

Ms. Clark noted Water Street, because of the children’s playground, has a lot of children using it and limits need to be reduced.

“The only way you are going to slow people down is to have police patrolling these area and fining people who are speeding,” said Ms. Clark.

Councillor Blodgett said he would put forward a motion to have all three streets designated community safety zones.

“At the end of the day it all comes down to enforcement,” said Mayor Ron Lane. “People slow down when they are entering Espanola because it is enforced to the hilt by the police. If there is enforcement there is no issue.”

“Why people don’t have their (vehicle) doors ripped off on Meredith Street by cars speeding through I don’t know. In the summer it’s like an obstacle course,” said Mayor Lane. He said even OPP officers need to slow down as well in town, especially travelling from the court house leading out of town.

Council passed a motion, with all of council voting in favour, except for Councillors Betsy Clark and Jack Clark, to amend the recommended motion and to have the section of Meredith Street from the corner of Agnes and Meredith Streets to the corner of Meredith and Dawson Streets be posted at 35 km/hr and that it be designated a community safety zone. As well, Water Street to Purvis Drive and from Phipps Street from Dawson to Main Street be both posted at 35 km/hr and designated community safety zones.