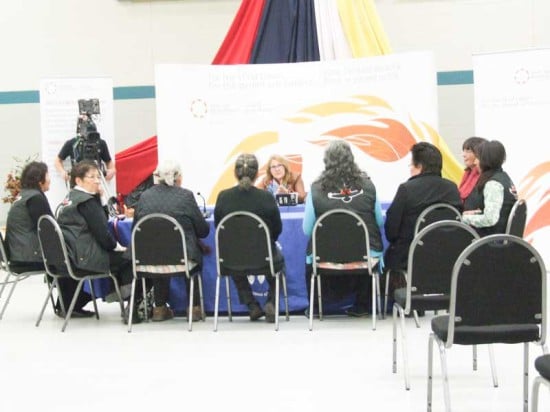 M’CHIGEENG––“Reconciliation belongs to all of us,” said Truth and Reconciliation Commissioner Marie Wilson during her opening remarks at the recent hearings at the M’Chigeeng First Nation community centre. “It is an ongoing individual and collective process. The work of reconciliation is the responsibility of all of us.”

The Truth and Reconciliation Commission was in M’Chigeeng First Nation to hold hearings at which those who lived through and experienced the residential school system, and those of their descendants who lived through the aftermath of the residential school system through interaction with their family members, could tell their stories for the record.

Commissioner Wilson referred to the hearings as “sacred gatherings.” “We are here for you,” she said to the survivors and their descendants in attendance. “We cannot do our job without you.”

The commissioner noted that although there is a significant public record of the point of view of the administrators and public and church officials who were involved in the residential school system, a record contained within their copious notes and journals, the same cannot be said of the children who were taken from their families and wrested from the bosom of their culture and language.

“We don’t have archives from the students,” said Commissioner Wilson. “Little children were not taking notes and keeping records.”

Commissioner Wilson noted that the hearings are not just about hearing the stories of Aboriginal people caught up in the residential school system and their families and communities, but about the larger community for whom the residential school system remains very much a mystery. But the lack of knowledge and understanding extends into both communities.

“It is not just non-Aboriginal Canada that does not know about these stories,” she said. “So many children and grandchildren don’t know the truth about what happened to them.”

As such, the commissioner welcomed the residential school survivors to the hearings as teachers. “You are the experts in your own experiences,” she said.

Commissioner Wilson cautioned that it was deeply understood by the commission that it “do no harm.” To that end, Commissioner Wilson asked those in the room who were health support professionals to stand. Almost half of those in the room stood up, many having come from local health providers bringing familiar faces to the role. Most of the support staff members were wearing black vests bearing an eagle flying toward the sunrise logo.

The commissioner cautioned those testifying not to name names of those still living who have not yet been through the justice system during the public hearings, although they could do so in the private sessions.

At the back of the room was a large enclosed booth. Within that booth, local language speakers were engaged in simultaneous translation of the testimony before the commissioner. Attendees could select headsets and transmitters from a box at the registration desk.

Cameramen and a bevy of technicians were also hard at work at the back of the room, filming, recording and transmitting the testimony onto the World Wide Web.

Brochures on the seats at the hearings cautioned those attending that their testimony in front of the cameras was part of the public document and could be viewed or recorded by anyone. Commissioner Wilson reinforced that message contained in the brochure, but also telling participants that they had the option to deliver their message in a private session.

The commissioner also noted that although the hearing seating arrangement was set up in a manner normal to commission hearings, some rearrangement of the layout was possible. She also noted that any number of supporters, friends, family or staff could join the person delivering testimony should they so wish.

The first survivor to speak was Mary Debassige, who began her story in Odawa, and did ask for some rearrangement of the seating, but it was mostly in the addition of seats at the table. By the time she began to speak, she was surrounded on both sides by numerous support staff.

Ms. Debassige noted that she was speaking in her language because she found it difficult to form the thoughts and emotions inside her through the less symbolic English language. She acknowledged that many in attendance, even Native, were not conversant in the language. “A lot of you are assimilated,” she said. “It is not your fault.”

“A lot of what I am saying does not translate,” she said. “(English) does it no justice.”

Ms. Debassige described life at the Spanish residential school as seen through her mother’s eyes and relayed to her mother’s friends during gatherings at the family home.

“I was told as a little girl to go outside and play,” she recalled. “She did that to protect me.”

That protection did not last through her life. Ms. Debassige said that she was raped many times when she was a child. “One of my mother’s aunts went to residential school and she raped me,” she testified. “The aunt had many friends coming to her residence.”

Ms. Debassige has spent her life terrified of the dark. “I have to have lights on in my bedroom,” she said. “I can’t sleep in the dark. I cry a lot in my sleep. I sobbed when I was in my sleep, I sobbed…”

Ms. Debassige went on to describe her own experiences at Lakeview Day School and the brutality of one teacher in particular. She spoke of having her braids yanked and being pushed to the ground by the teacher. “These were non-Native teachers,” she said. “Non-Native white men.” She described being taken into another room full of candies and starting to cry. Her friend rescued her.

Ms. Debassige went on to describe her feelings of pride in her culture and her people. “We have an elite way of being,” she said. “A very high way of living.”

She noted that non-Native people have a great deal of difficulty with silence. “Silence is good,” she said. “They don’t know how to be quiet. All the time it is yak, yak, yak.”

Another survivor, Saul Dave, spoke of his lifelong struggles with drugs and alcohol following the sexual abuse that began when he was eight-years-old and continued on until he was about 12. He was left with a great difficulty in forming a relationship with a woman unless he was heavily self-medicated with alcohol.

He adopted an unusual coping mechanism in life. “I retreated into education,” he said, noting that he acquired two university degrees and a number of college diplomas. “I didn’t want to leave school,” he said.

He found himself going through life as an emotional observer. Getting married, “because that is what you did,” having children, getting divorced, getting remarried (to the same woman) and getting divorced again-all accomplished without emotion—an intellectual automaton.

“I could not let a woman come close to me,” he said. “I was so disgusted.”

He was largely unaware of the abuse that had been perpetrated upon him. His subconscious remained aware, but his conscious mind shut it out. Instead, he found himself having to analyze everything around him. “When I found the answer to a math question, I wanted to know why the answer was right,” he said. “I would take it apart and put it back together again.”

Not all of the testimony was as negative or filled with tales of horrible abuse. Melvina Corbiere of M’Chigeeng noted that her time at the Spanish residential school provided her with an education for which she was grateful. She described not being happy with being at the school, but not being traumatized either. The same could not be said for her sister. “There were some children at the school who were always running away,” she said. “My younger sister was one of those.” Her sister would constantly run away and come to stay at her house “up country.”

She would stay for a couple of days, but eventually someone would come by and collect her.

Ms. Corbiere said that it was likely her experience at the school was better than many because she attended the residential school at a much later date than many. “I think they were a lot stricter before,” she said. Ms. Corbiere said that she experienced no real abuse during her time at the Spanish residential school, physical or otherwise. “I didn’t like it, but I guess I had better coping skills than some of the others,” she suggested. “But I am grateful for the education I received.” Ms. Corbiere went on to enjoy a successful teaching career in her home community and raised a family of her own.

Non-Native observers at the hearings included Jane McKay Wright, whose work with KAIROS has been previously chronicled in this paper, and Gary Champagne, a retired civil servant who had been very involved in First Nations negotiations.

“This is not a Native story, it is a Canadian story,” said Commissioner Wilson during a break in the proceedings. “It is about the things that happened to Native people in Canada at a time when they did not even have the opportunity to vote.”

“This is a remarkable historic event,” said Ms. McKay Wright. “I am honoured to be here.”

That sentiment was echoed by Mr. Champagne, who noted that the story of the residential school system needs to be made a core part of the school curriculm. 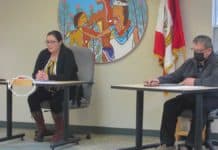