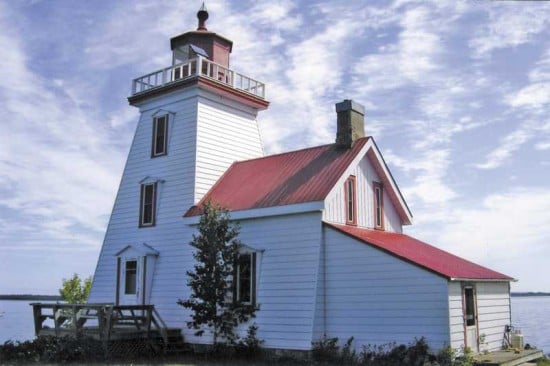 MANITOULIN––Helicopter-borne repair crews braved gale force winds to replace shattered windows in the Duck Island lighthouse recently, stopping by the lighthouse at Strawberry Island to apply some timely caulking to the cupola around the light.

“I am pleased to see the repairs taking place,” said Manitoulin Lighthouse Committee co-chair Bill Caesar. Although the repairs fall somewhat short of what is needed to protect the historic structures, the effort does indicate some commitment from the Department of Oceans and Fisheries. “At least they aren’t just going out and knocking them down,” he said.

Committee co-chair Rick Nelson agreed, although he expressed considerable dismay that the powers that be have decided not to proceed with significant repairs to the roof of the Mississaugi Lighthouse in Meldrum Bay. “They opted to go with another tarp,” said Mr. Nelson. “The previous tarp was torn to shreds. What is needed out there is a new roof, instead they are spending another six or seven thousand on a tarp.”

Estimates on repairs needed to the Mississaugi Lighthouse run between $60,000 and $80,000. “It would be less expensive for a local organization to do the work,” said Mr. Nelson. “But nobody locally can really afford to make that happen.”

Currently, hopes hinge on the possibility of a government/private partnership to save the structure, with a private donor providing the base funding to make the lighthouse repairs a reality.

Mr. Nelson announced that a formal request for the Fresnel lens in the Duck Island lighthouse has been submitted. A Fresnel lens is a specialized glass lens, originally imported from France, which magnifies light dramatically. The cost of the lens when it was first installed would likely have cost in the millions of dollars when first purchased. Hopes are to make the lens a centrepiece in the new Purvis Museum being built. The Purvis family has a deep connection to the Duck Island lighhouse. “George Purvis’ great grandfather was the first lighthouse keeper,” said Mr. Nelson. “George has been the unofficial guardian of the site.”

It was Mr. Purvis, who operates a commercial fishing enterprise at the west end of Manitoulin, who first alerted the committee to the damage at Duck Island.

“Basically, the windows were completely blown out,” said Mr. Nelson. “If it hadn’t been for his vigilance, who knows how much damage would have occurred before it had been spotted.”

Negotiations for the transfers of local lighthouses that have been declared redundant for navigation purposes, to local interests, primarily municipalities (although national conservation groups have expressed an interest in the Duck Island property) are ongoing. It is expected that less encumbered lighthouses such as those located at Manitowaning and Kagawong will be taking place relatively soon. Others, especially those with large tracts of associated land, may be more problematic.