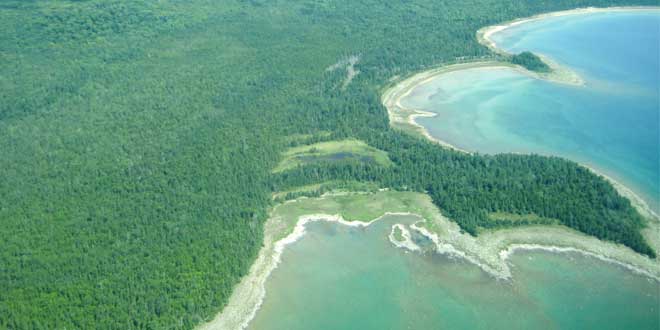 SPANISH—The North Channel Marine Tourism Council (NCMTC) has been promoting marine tourism and North Channel marine communities for decades, and this year the NCMTC teamed up with FedNor and media marketing firm Lifestyle Integrated to produce a DVD featuring boating in the North Channel. The DVD content was used during a program segment of the popular boating show Powerboat Television that focusses on boating in the North Channel. The NCMTC has acquired a number of the DVDs for its membership and is encouraging North Shore and Manitoulin marinas and marine communities to retail the DVD in their facilities.

“We have done this partnership a couple of years ago with the folks at Lifestyle Integrated and the videos from that project really went well,” said NCMTC Chair Stan Ferguson. “This is one of the best values for my money for showcasing what the North Channel and our marine communities have to offer.”

Mr. Ferguson, who operates Harbor Vue Marina in Little Current, noted that the DVD is available for $34.95 retail and that the NCMTC has acquired a number of the DVDs at wholesale rates for their membership to retail. “The wholesale buy-in numbers for the DVDs requires people to buy a lot of the DVDs to qualify for the lower price and a lot of our members are small operations so we decided to get a number of the DVDs for our members who would like to sell them, but don’t want to buy that many.”

Lifestyle Integrated’s website notes that the company’s various media properties deliver 80 percent of marine media impressions in Canada, across video, print and Internet. That market penetration allows the company to offer “a 360-degree marketing approach for a fully integrated and customizable media program.” Lifestyle also delivers in French to Quebec through print and Internet and in the United States with PowerBoat Television in broadband and websites created specifically for US boaters.

“Powerboat Television really has a reach into the American market,” said Mr. Ferguson. “It would be impossible for us (NCMTC) to buy that kind of exposure in the US market.”

PowerBoat TV is a weekly half-hour television show focussing on power boats and the boating lifestyle, notes the company website. But you don’t have to live south of the border to tune in to the program. “From fish boats to luxury cruisers, great destination and helpful DIY segments, we cover what’s of interest to boaters at large. PowerBoat Television is broadcast in HD across Canada on Global Television on Saturdays at 11 am.”

The promo for the DVD describes the North Channel as stretching between Georgian Bay and Lake Huron and that it is often called the world’s best fresh water cruising ground, adding that “few who have visited would dispute that title.” It describes the 90 nautical miles of the passage between Killarney in the east and Drummond Island, Michigan in the west as being “surrounded by breathtaking scenery and offers clean water, sheltered anchorages and welcoming ports-of-call.”

“There is no question that the North Channel offers the ‘best freshwater boating in the world,’” said Mr. Ferguson. “That’s why we put that slogan right in our NCMTC logo.”

The DVD is available at Harbour Vue Marina and at The Expositor office in Little Current as well as other marinas and communities around the North Shore.