GORE BAY—The Gore Bay Fish and Game Club is now raising walleye in its hatchery, the first club to raise this species of fish in a hatchery.

Mr. Anderson explained, “there have been some losses of the fish over the 10 days but it has been very, very minimal—we’ve lost around 100 in 10 days. That might sound like a lot but not in the case of walleye which are extremely difficult to raise.”

“These pond fingerlings are being raised directly in the hatchery,” said Mr. Anderson. “We owe a big thank you to the Ministry of Natural Resources and Forestry for providing the fish to raise in the hatchery. We’ve received a lot of help and support from the MNRF; Paul Methner has been really helpful as has Dale Jordison who has replaced him in the MNRF with Paul’s retirement, Wayne Selinger and other staff members have been very supportive and really good in working with on this program.”

“We hope to be able to raise walleye annually in the hatchery,” said Mr. Anderson. “Our objective at the end of raising the fish to full fingerling weight is to plant them in Lake Kagawong, which we have permission for.” 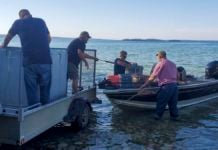