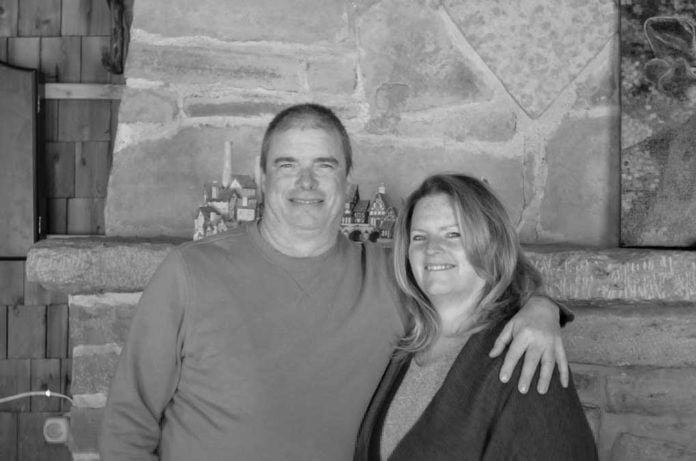 The most difficult thing for most people moving to a new community is leaving loved ones behind. Mike and Debbie Whatling got around that issue by bringing three generations of their family with them when they left St Catharines and purchased Wee Point Cottages on Lake Manitou in the summer of 2021.

“When we told our family we were thinking about buying a campground in Northern Ontario, their immediate reaction was, ‘Wow, can we come too?’” laughs Mike.

“We came as a convoy!” adds Debbie, describing the scene as she and Mike, her parents, and their daughter and husband Martin travelled together to check out the property. “The minute we drove in and saw the place, we all knew, this is the one.”

Debbie and Mike were taking a major gamble making the move. Neither of them had previously visited Manitoulin or knew anything about the Island. And the change in careers meant selling a thriving computer numerical control (CNC) machining company, Niagara Precision Limited, that serves the nuclear, military, aerospace, automotive, food, energy and mining sectors. They were setting aside action-packed executive roles in a firm employing 20 to become jacks of all trades running a tourism operation, an industry in which they had no experience.

It was the adrenaline-pumping part of their business that motivated the couple to explore less stressful ways to make a living. They were extremely grateful for the extraordinary business opportunity Debbie’s father, Rod Paige, offered to them upon his retirement. However, after 10 years of growth and expansion, the business’s success was starting to make that blessing almost a curse as the relentless pace and long hours took a growing toll.

It didn’t start out that way during more carefree days when the duo started dating in high school. After graduating Debbie studied interior design but didn’t stick with it when she realized that work in the field would require moving to a large city like Toronto, which held no appeal. Her primary interest was in settling down and having a family. As the couple’s long-term intentions became clear, her Dad invited Mike to become a tool and die maker and join the business too. He went to college to learn the trade and did his apprenticeship with the company.

They married soon after and had two children, a daughter, Kayla, and a son, Michael. Once the children were in school, Debbie joined the family firm working in office administration in 2021. The family lived a happy life on a small hobby farm outside the city within commuting distance of St Catharines.

It was only when her father and his partner, Norm Kiddy, retired a decade later that Debbie and the other owner’s daughter, Jane, took over the operation. Being female business owners in a male-dominated industry was a major accomplishment but it brought with it a heavy workload. The lifelong friends soon discovered just how demanding and exhausting the business would be.

Meanwhile, Mike became plant manager, which meant hiring, training and overseeing a regular rotation of apprentices and seasoned staff as employees were always in short supply. Seeing the firm’s competitors encountering the same challenges, Mike also co-founded the Niagara Industrial Association, a business group of manufacturers and suppliers, to mutually support each other in addressing common problems.

“The Association became huge over time, with more than 200 companies, so that just added to my stress level,” explains Mike. “We were constantly rushing to meet deadlines and had no time to breathe. We both agreed that it was getting to be too much.”

“At some point you say there must be more to life than this. Plus, we had our small hobby farm,” Debbie chimes in. “It was our sanity and sanctuary from our jobs in the city, but it also meant more work.”

When the stress became intolerable, they decided to make their next five-year plan an exit plan from their fast-paced life – one that would see them sell the business and farm and run a small business somewhere.

After the pandemic struck in late winter 2020, they talked with Debbie’s parents and kids about what they were contemplating. With their buy-in, the next conversation was with her business partner who, while initially shocked, eventually bought her out. Then the challenge was finding a business, ideally in Northern Ontario where their son Mike was working as an Ornge fixed wing pilot based in Timmins.

Their first stop was a campground on Lake Nipissing, but the real estate market then was in hyperdrive and they weren’t quick enough to snap it up. They also still had to sell their farm.

Mike and their daughter Kayla found the Lake Manitou property and the entire crew made a rush trip to see it, by which time there was already another offer. Fortunately for the Whatlings, that deal fell through and they were able to negotiate a mutually satisfactory offer that the owner, Pat Hembruff, accepted. A day later, their farm outside St. Catharines also sold and they became the proud new owners of their dream business.

“We still pinch ourselves that it all worked out. A lot of it has been by the seat of our pants but everything has exceeded our expectations,” says Debbie. “We have all settled into our new life that we are proud to share with our wonderful clients. We have loyal customers who have booked in advance up to 2024 and the benefit of the wisdom and good company of Pat Hembruff, who comes back every summer to spend time with us. Our daughter and her husband have found good jobs and now their friends and other family members want to move up too.”

“It took us a while to get used to Island life. We had to learn to slow down after our crazy busy former life,” admits Mike. “But now, when I sit by the water and drink my coffee in the morning, I cannot believe our good fortune. Everyone we have met has been absolutely amazing, providing good advice and helping us out. Life is certainly sweet these days.”

Heather Marshall and her husband worked as journalists and consultants in the National Capital Region for more decades than they care to admit before making their Sandfield cottage their permanent home.  A lifelong learner, Heather loves discovering new things and people and relishes the opportunity to write about newcomers to the Manitoulin. If you would like to share your story or know of recent arrivals we should meet, send a message to HAMarshall@proton.me