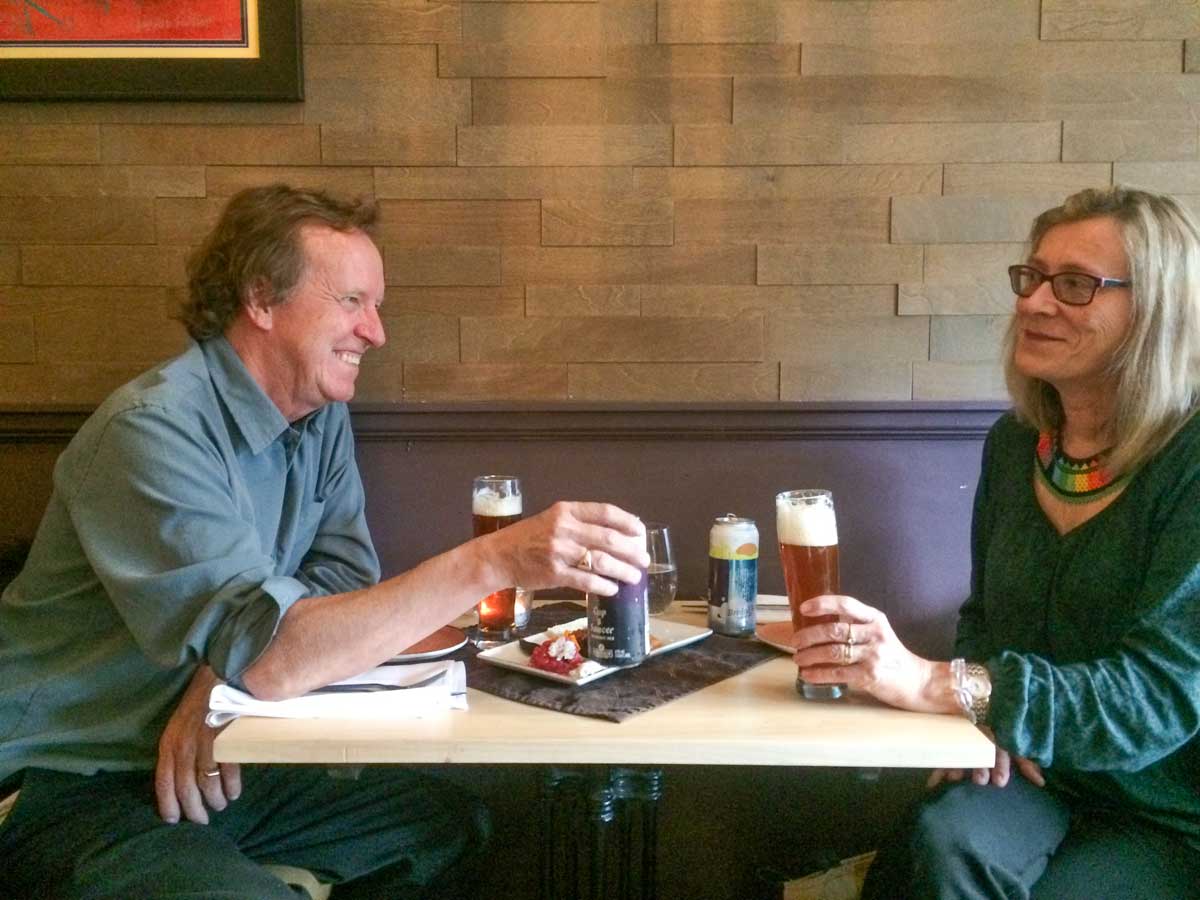 TORONTO—“This tastes just like cedar!” I said to my wife Helena after having a sip of the complimentary “cedar tea” that Ku-Kum Kitchen Manager Jeff Buensuceso had just placed in front of us. “Except I’m not sure I’ve ever actually eaten cedar before. At least not on purpose.”

Helena suggested that the aroma of food affects its taste and started recalling some of the taste-bud stuff she learned when she was studying science at the University of Toronto. And as she talked, I thought, ‘This is fantastic. This is the kind of conversation people have on dates!’

More than 30 years earlier, when I worked at The Expositor and Helena at the Sudbury Algoma Hospital, we dated and dined at various eateries around Manitoulin. Now, three kids, two careers and one grandson later, we were on a date again, at Toronto’s most-talked-about new eatery, Ku-Kum—Indigenous Kitchen, co-owned and operated by Wiikwemkoong’s own Joseph Shawana, 35.

Mr. Shawana, father of a two-year-old son named Hawk and husband of Vanessa Hernandez-Palma, left the Island after graduating from MSS, knowing he longed for a career in the food business. He inherited his culinary passion from his mom and grandmother, he says, and started as a dishwasher at the old Schooners Restaurant in Manitowaning, where his mom was a chef.

Various kitchen jobs at golf courses and restaurants around the north preceded his 2006 move to Toronto, where he started up the food chain, with positions at such tony spots as Pusateri’s and Windsor Arms. And in just over 10 years, he rose to where he has this place of his own, in one of the city’s must upscale and fashionable neighbourhoods around Mt. Pleasant and Eglinton.

Ku-Kum opened in June to extremely favourable reviews. Several other Indigenous restaurants have graced the Toronto food scene, but Mr. Shawana’s haute-cuisine atmosphere, with its delicately arranged portions and painfully meticulous preparation, set a new standard. A Toronto Life review titled ‘To Bannock and Beyond’ read: “Shawana’s genius is to seamlessly weave his favourite Indigenous ingredients and recipes together with a classic French approach.”

So he got off to a good start. It gets better.

On October 2, the online version of Time Magazine’s sister publication Food&Wine posted a glowing review of Ku-Kum and mentioned that one of the Indigenous-based menu items was seal meat.

A California-based animal-rights organization called Care2 took offence and within days had almost 7,000 anti-Ku-Kum signatures from places as far flung as Croatia, Belgium and South Australia on an anti-seal-meat petition. That was followed by an anti-petition petition and news coverage across the planet.

Seal meat stayed on the menu.

“Business was good before that, but since the petition? It’s been terrific” Mr. Shawana says.

I’m not even going to attempt to describe what it’s like to eat at Ku-Kum. I just suggest you try it yourself next time you’re in Toronto.

However, I will share Toronto Life’s take on what the seal tartare is like: “The seal meat was a forbidding midnight black, wet and alien, topped with the quivering yolk of a raw quail egg. It tasted of brine and iron, bringing to mind ice floes, waves raising a mineral foam on rocky shores, and a diet of cod and krill. Paul McCartney won’t be pleased to hear I liked it.”

I liked it, too. Our seal was served with a garnish of salmon roe, as an appetizer, along with smoked trout and beet-and-maple-something smoked salmon. Plus bannock that Mr. Shawana says is based on his grandmother’s recipe albeit with a shot of maple syrup.

Not only did Helena and I have a delicious supper, we shared an historic moment. The day of our visit, Ku-Kum took its first delivery of Manitoulin beer from Manitoulin Brewing Co. I had a Cup-and Saucer English Ale and Helena enjoyed her Bridal Veil Pale Ale.