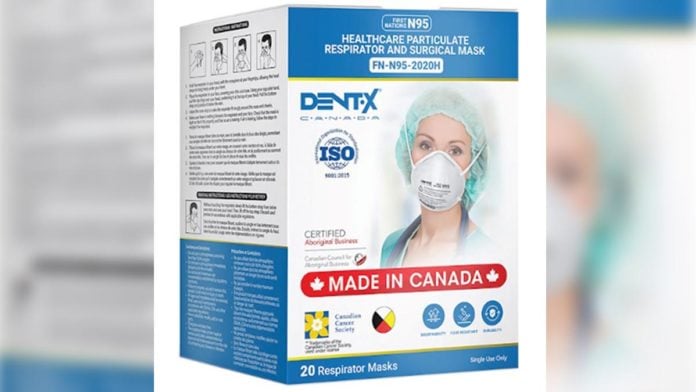 ﻿TORONTO—As mandatory mask mandates are being lifted across the province (although health care and long-term care masking requirements will likely be extended past April 27), Jimmy Emms, president of Dent-X Canada, is concerned that government messaging is somewhat flawed.

Dent-X is the mask manufacturer that established a plant in Wiikwemkoong, which was opened to some fanfare during the earlier days of the pandemic, and which employs a significant number of people at both the Wiikwemkoong facility and a sister plant established at the same time in Sagamok First Nation.

Mr. Emms questioned why the provincial government is buying 3.5 million three-ply masks, masks he asserts are relatively poor at protecting the wearer from the COVID-19 virus and an action he believes is misleading the general public over those mask’s effectiveness.

Mr. Emms supplied a link to a CBC video of tests, by way of background, that demonstrate that three-ply masks can provide as little as 23 percent protection. Other video links to Harvard University and other medical studies demonstrate the effectiveness of N95 masks in preventing transmission to both the wearer and the public around them.

“Our question would be why would the government stockpiles vast sums of three-ply masks for COVID-19 when it is clear it will do very little to protect wearers from the virus?” wrote Aliyah Imran, Dent-X general manager. “Why has the government not contracted to have manufacturers produce ear loop N95 masks? Why when one walks into a nursing home or a hospital, why do they disarm people and provide them with an inferior three-ply mask?”

Mr. Imran offered media reports citing examples of people entering hospitals for unrelated issues and contracting COVID while there. “In some cases, like the CBC reported on the weekend, that number is greater than the number of people that went to the hospital with COVID-19,” he said. “Why is it today, two-plus years into the pandemic, would workers at nursing homes and visitors still not be required to wear N95s, when it is crystal clear that this is where the vast majority of deaths came from? Is this clearly not an absolute failure of government? The public should know and be protected, or at least have the chance of being protected.”

Mr. Imran provided insight into why the company was raising the issue. “If we speak out now maybe we can avoid further lockdowns, school closures and disruption of people’s everyday lives,” he said. “If we remain silent, we fear we will go through this all over again.”

Mr. Emms said that his company was now supplying N95s to nursing homes free of charge.

That isn’t the only issue Mr. Emms has with provincial policies.

Dent-X has invested $40 million of private money into building local capacity to produce masks, he noted, putting people to work on First Nations communities which often don’t have those kinds of local employment opportunities. “We spent $40 million to help,” he said. Meanwhile, the government gave a foreign company $50 million of taxpayers’ money to build a plant in southern Ontario and now only purchase their N95 masks from that company.

The entrepreneur said that his company has received conflicting messages from provincial politicians and little but stalling tactics from civil servants.

“They asked us to send them the test results from our masks, tests we had already sent them,” he said. “So, we resent the tests. Then they asked us for samples of our masks. And that even with that, they told us there was no guarantee they would buy any of our masks.”

Dent-X does have plenty of customers, with the Royal Canadian Mint and Coca-Cola being two of them. The Dent-X N95 masks come in three different sizes to provide better fit than a one-size-fits-all approach.

“If we relied on masks that work we would have a population that is 95 percent protected as opposed to 23 percent,” said Mr. Emms. “If everyone wore those masks for four weeks, the pandemic would be over.”