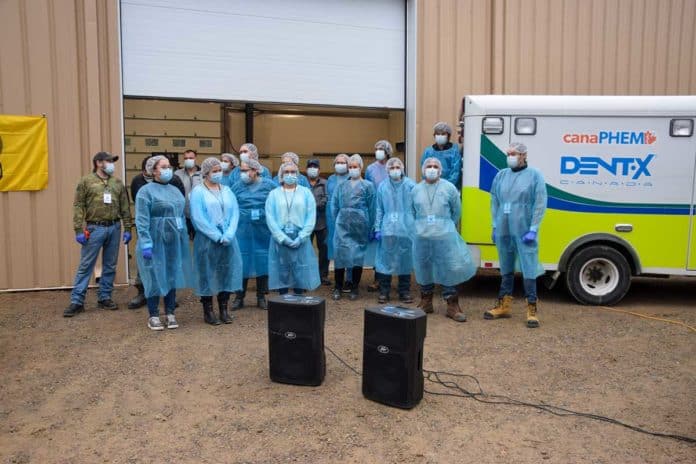 WIIKWEMKOONG – The production of personal protective equipment (PPE) masks in Wiikwemkoong and Sagamok are great good news stories, with FNProcurement Inc. and its partners sighting in on the one million mask mark at its First Nations-based facilities in those communities. But the veritable fly in the ointment is the roadblock to expansion presented by the federal government’s procurement policies and practices.

“Things are going very well at the factories,” said Matthew Owl, president of FNProcurement Inc. when contacted by The Expositor recently about how things are going. But the entrepreneur couldn’t keep the frustration from  his voice when it came to selling three-ply masks to the federal government. “We can’t seem to get any contract for the three-ply masks.”

Mr. Owl said his sources indicate the government is still purchasing those items of PPE from off-shore sources, despite their own oft-touted five percent targets for purchasing from Indigenous businesses.

Much of the success of the FNProcurement Inc. facilities is linked to the orders pouring in from First Nations organizations, noted Mr. Owl. But when it comes to federal orders, it’s crickets in the hallways—well, not exactly. A short letter back from Public Works and Government Services Canada (PWGSC) offered condolences that their bid had not succeeded, but offered no insight as to why.

“It’s disheartening the government has not stepped up to the plate,” admitted Mr. Owl, who was anticipating expansion of a business that has brought huge dividends in local employment and social wellbeing to remote Indigenous communities. The lack of feedback was also dispiriting.

“When I asked, ‘was the bid too high? Was the bid too low?’ They invoked the Emergency Provisions Act, which means they don’t have to divulge any information,” he said. “What exactly is national security about three-ply masks?”

The federal procurement requirements called for the company to have 16 million units ready to go, with plenty on hand to fill stopgaps in supply. His company was more than ready and willing to meet that bar. “We had high hopes,” said Mr. Owl.

Three-ply masks are the familiar blue rectangular disposable masks that have become ubiquitous during the pandemic. FNProcurement Inc. also manufactures N95 masks, which are white and produced to exacting standards.

“We are not asking the government for money,” said Mr. Owl. “We are just looking for them to purchase a high-quality product that meets their needs.” He noted that Canada has had to return a huge amount of sub-standard PPE to other nations, primarily China. “I just don’t get it,” he said.

Mr. Owl has reached out to Algoma-Manitoulin-Kapuskasing MP Carol Hughes for assistance in finding answers, but despite her best efforts much remains opaque in the procurement process.

“I received a letter on this on January 4,” noted Ms. Hughes, who also has had little luck in changing the narrative so far. It is a situation that the MP finds puzzling.

“The government should be supporting those businesses that stepped up and retooled their operations to supply the materials we found ourselves short of at the start of the pandemic,” she said. “Instead, the government has continued to procure supplies from abroad.”

She related hearing that workers in long-term care facilities are still being restricted when it comes to accessing adequate supplies of PPE—with escalating costs being cited.

Ms. Hughes noted those challenges are still happening even in the face of the devastating losses experienced at  long-term care facilities, notably in the Kapuskasing region of her riding. “That, despite companies distributing $74 million to their shareholders,” she said. “You can see where their priorities lie.”

As for the opacity of the bidding process, Ms. Hughes did cite the challenges presented by maintaining the fairness in the request for proposals process as a difficult stumbling block to overcome.

“But is the lowest bid always the best bid?” she asked, pointing to the issues surrounding the ongoing challenges of ensuring clean potable water to remote First Nations reserves. “I understand the monetary part,” she said, but pointed to the issue of getting good value for money. “I support FNProcurement and DentX in their applications and the innovations they have taken.”

The Expositor reached out to PWGSC but had not heard back by press time Monday.