MANITOULIN— The Royal Canadian Legion’s Ontario Command Zone H3 is urging Island citizens to spare a few minutes to write a postcard note to a serving member of the Canadian Armed forces to wish him/her a happy Canada Day.

The colourful postcards are being distributed on Manitoulin Island through the Little Current and Gore Bay branches of the Royal Canadian Legion.

Spokesperson Linda Bowerman is spearheading the initiative in Little Current and she made sure there were postcards for people to pick up at local churches after last Sunday’s services.

“The cards are self-addressed,” Ms. Bowerman notes, “and no postage is needed.”

“All one has to do is write a message of thanks, letting our troops know how much we appreciate them, and wish them a happy Canada Day.”

In Little Current, the post cards are available at The Expositor Office or from Ms. Bowerman (705-368-2465) and there will be a special box at the post office where cards can be deposited for eventual delivery to troops.

Gore Bay Legion President Jim Woods confirms that his branch is also part of the initiative and that postcards can be picked up at the Legion and at participating stores downtown.

If you wish to put your return address on the cards, there is a place to do that. 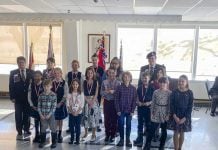 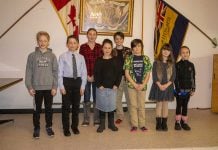