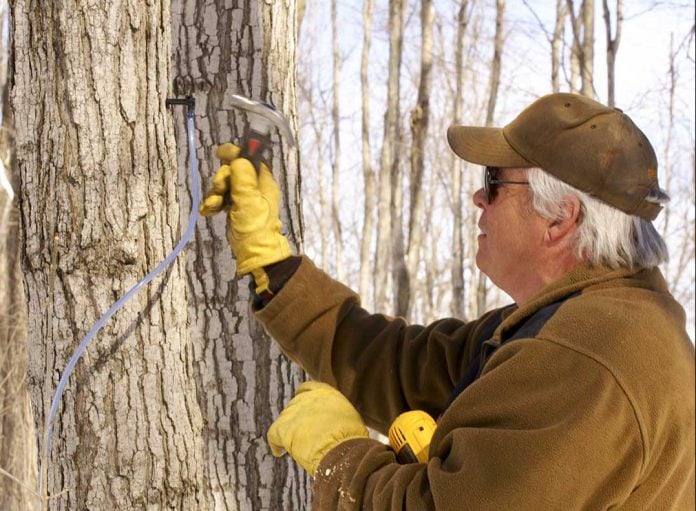 “We’ve got cold weather,” he explained. “We’ve got some fresh snow again. I make my best syrup in the first 10 days of April. Minus five to plus five is what you’re looking for, temperature wise. If it gets above plus five the sap starts to slow down. If it’s below five the sap takes too long to thaw.”

There are no clouds and no wind on this mild March day. Ice Lake is visible through the trees at Ross McDougall’s bush. The lot has been in his family for about 100 years. It hasn’t been tapped in 40 or 50 years. “That’s a good thing for me,” said Mr. Bainborough, who will be installing roughly 1,500 taps over the next two years.

The lines at Mr. McDougall’s were installed last fall. They’re a new product, a 3/16 inch food-grade plastic tubing (not potable water, there is a difference) and they can generate a natural vacuum. “This tubing is a little more expensive but it’s cleaner,” he said. “If you’re selling syrup wouldn’t you want it to be the best you can make?”

Mr. Bainborough expects the lines to work well here where there is a natural 60 foot slope. “Everything flows down the hill into a pipeline system and the pipeline is sloped with enough gravity to feed into the 1,200 gallon tank. From the tank I’ll pump it and haul it back to my sugar house.” In a good maple season, Mr. Bainborough expects to see about 20 runs to empty the tank.

Although he’s putting taps in, he says it’s a bit early to be putting buckets out. “It means the spile is open for a good two weeks,” he explained.  “The air gets at it and the tap hole starts to seal. When the sap starts to flow well at the end of March the tap will be a little dry.  Whereas if you use this pipeline system the tap goes into the tree and no air can get at it so the tap hole won’t dry out.”

“We just set up a bush in Wiikwemkoong using the same type of system,” he continued. “It’s a nice bush, not very big, but for what they need to start it’ll be good They’ve tapped that bush before but on pails. This will be a lot better for collection. They’ll get a lot more sap. It has a different slope so they’ll have to pump it out.”

“I look at Manitoulin and Manitoulin’s great for maple syrup. We’re all on limestone which usually gives a lighter and cleaner syrup than the ones on clay belts. Some of the nicest syrups come from gravel pits or sand. A healthy bush that’s been well managed is important. A good stand of maples but some diversity too. Undisturbed healthy soil. And only tapping mature trees greater than 10 inches in diameter.”

It takes time to tap 1,500 maples. It’s not a difficult job but you want to seat the taps correctly and make sure the lines aren’t loose. “You have to have a passion for this,” said Mr. Bainborough. “Even to make syrup just for yourself. It’s not a 9 to 5 undertaking.”

Maple Weekend is April 7 and 8 this year. Maple Weekend is when producers open their doors and show people how syrup is made and share samples fresh off the evaporator. Maple Ridge Farm will be participating. Visit www.mrfarm.ca or www.mapleweekend.ca for more information.