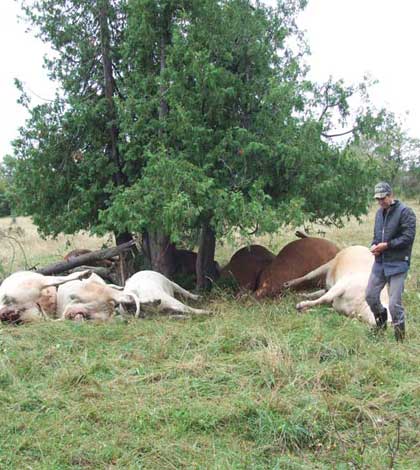 GREEN BAY—Small family farms bring with them a wealth of deep satisfaction and delight for those hardy individuals who nurture their fields in the face of all that Mother Nature tosses their way each season. But the joys of watching the literal fruits of your labours grow and prosper can be offset with heartbreakingly abrupt tragedy, as months and years of labour are arbitrarily wiped out in a flash by a chance turn in the weather.

Tragedy came calling in Green Bay farmer Bruce Wood’s fields this past weekend when a neighbour knocked on his door to tell him that some of his cattle were lying still under a tree in one of his pastures. When he went to investigate, he found that a bolt of lightning had struck a tall cedar under which eight of his cows were sheltering from the storm—instantly killing eight bred heifers and their as-yet unborn calves.

Climbing toward where the cattle carcasses lie forlornly packed together under the shattered cedar rising from a rain-soaked pasture on a steep hillside overlooking the road below, farmer Bruce Wood points to an outcropping of dolomite bursting up through the thin soil underfoot. “We can’t even bury them here,” he said. “We have to take them down the hill and over to another pasture where there is some deeper soil.”

As we arrive at the site of the lightning strike, the bodies of the dead cows are badly distended from the gases building up within. The legs of an unborn calf protrude from one of the heifers. The carcasses had already started to bloat within hours of the deaths and that was yesterday. “It’s hard to even look at,” said Mr. Wood.

The financial hit to the Wood farm from this tragedy is likely to be substantial, even though he does have insurance, he doesn’t know how much of the loss will be covered and it is pretty certain that the coverage will not extend to the loss of the unborn calves. “These are $1,600 cows,” he notes, their actual value lying somewhere in the range between $1,600 and $2,000 apiece. But the farmer’s loss extends far beyond the initial financial hit.

Mr. Wood shakes his head as he ducks under the tree to begin pulling tags from the ears of the cows. “This here was my best cow.” he said, pausing to look down over a still pale white body lying right next to the tree trunk.

These are the animals that Mr. Wood hand-picked to be the future foundation of his small herd of 55 cattle. He knew each one of these animals well, understood the various quirks in their personalities and their individual character habits. “They are almost like pets,” he said.

Mr. Wood looks out across the valley below the hill back toward the road. “I wish I could move them out of sight of the road at least.” But he can’t. Mr. Wood has to wait for the insurance adjuster to come and verify the loss before he can begin to move the bodies. All morning he and his uncle have been waiting by the phone in the farmhouse for the call from the insurance company. Meanwhile the cattle are deteriorating fast in the hot August weather.

“They will start to smell soon,” notes Mr. Wood as we begin to walk back down the hillside. “It is tricky to move them. You have to be careful how you do it.” The methane buildup within cattle can actually cause the bodies to rupture and even explode, with very unfortunate results.

Like most farmers Mr. Wood is taciturn in most of his communications and not much for complaining, he takes the loss of his herd with the resigned air of a seasoned tiller of the soil and there is little to read of emotion on his face. But the farmer notes that he would prefer to make the connection with the insurance adjuster sooner rather than later. Mr. Wood wants to make the rounds of his other pastures and check on the rest of his small herds. “Right now I don’t even know if they are alright,” he said.

His son had reported seeing one calf born to one of his heifers in another field, but when Mr. Wood went to check, the calf was nowhere to be seen. If the animal has fallen victim to a wolf or bear, he will need to find the carcass to prove the loss to the government.

The damage from the storm could have been much worse. “The lightning hit the house too,” he said. “We could smell smoke in the bathroom.” Mr. Wood shut the breaker to that area of the house as the family checked for where the smell of smoke was coming from. The smell abated, but he will still have to have the wiring checked for damage.

“My father always said, ‘if you can keep it down at the barn and out of the house, you are doing alright’,” said Mr. Wood.

The loss of cattle to lightning, particularly in such numbers, is rare. Mr. Wood recalled that his father had once lost five animals to a similar situation. “But that was over 40 years ago,” he said.

Mr. Wood admitted that he was at first reluctant to talk to the media about the loss of his cattle, but he relented in the interest of helping to educate those who know little about the challenges facing small family farms.

He has spent much of the last week chasing blackbirds out of his sweet corn and a neighbour is walking his dogs around Mr. Wood’s grain fields to scare off the hordes of sandhill cranes that are ravaging the plants. “His wife doesn’t want me to shoot them,” he said. “So he is chasing the cranes off.”

For his part, Mr. Wood recently made a representation to the Ministry of Natural Resources to encourage the government to institute a loss program to compensate grain farmers for losses to flocks of birds similar to one that is in place in Alberta. He found the reception from the MNR officials to be encouraging, for a change.

In addition to the normal challenges of weather and disease that can afflict living things despite all best efforts, farmers must constantly deal with government decisions too often made by those who have little understanding or empathy with realities facing small family farms.

“There are fewer small farms every year,” Mr. Wood said. “Sometimes it seems like the government does its best to make it even harder to make a go of it.”

Mr. Wood closes the gate and looks back up the hill at the tight group of pale and dark brown bodies lying under the tree on the hillside before climbing back in the car for the trip back to the farm and the vigil by the telephone, waiting for the insurance company to call. 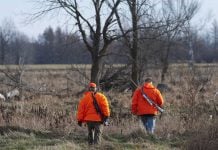 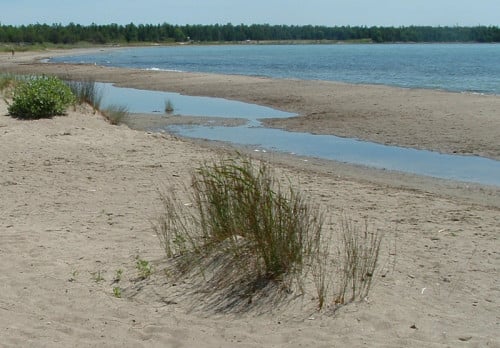 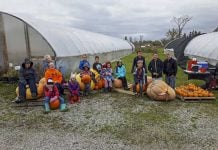