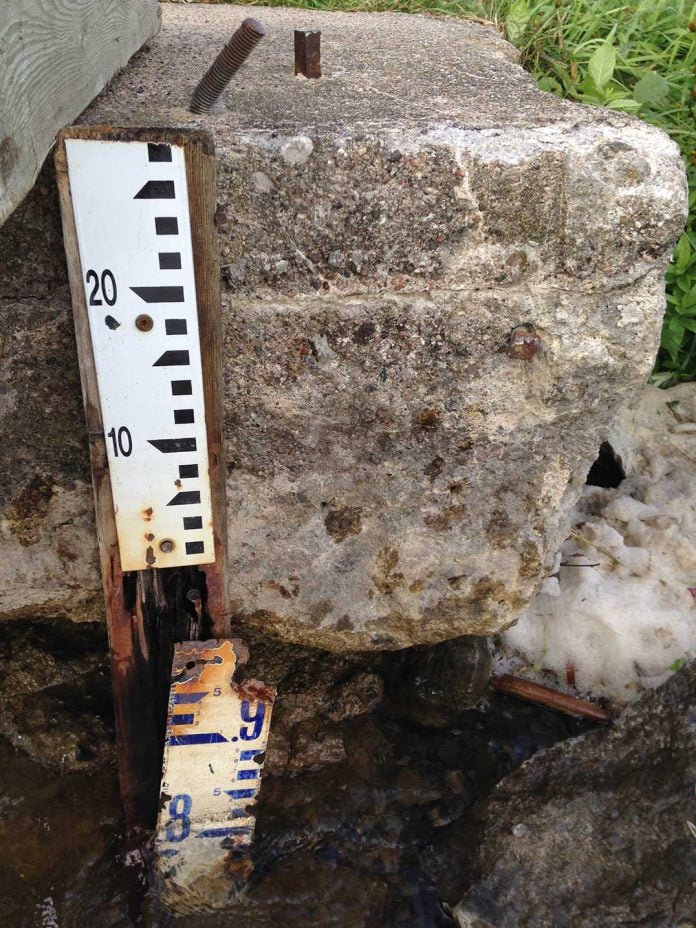 KAGAWONG—With the low water levels on Lake Kagawong and concern for the manner in which the local generating station is being operated (with not being in compliance with the Kagawong River Water Management Plan), the Action Kagawong Watershed Association (AKWA) is being revived.

“I have taken on a bit of a caretaker role on this, working behind the scenes with others to activate AKWA again,” Mike Boyd told the Recorder last week. “The former association members are extremely disappointed with the current operators of the hydro generating station’s behavior this summer that has helped lead to low water levels; and we are also very disappointed in the municipality for not double checking—it is hard to believe someone didn’t know what was going on and assigned staff to monitor the water levels.”

Mr. Boyd, a Long Bay resident, told The Recorder “the water here has dropped two feet at least this summer. People are talking about not being able to get their boats in the water, moving their boat lifts, and there are effects on the marine habitation on the shoreline and low lying areas. It’s as important as protecting habitat downstream at the falls.”

Mr. Boyd told The Recorder, “there will be more news to follow through the fall, on AKWA becoming active again, including announcing who the groups contact people will be.”

Mr. Boyd explained that there are actually three municipalities that border Lake Kagawong: Billings, Central Manitoulin and Gordon-Barrie Island and all three have a role in maintaining and making sure the lake is in good shape.
“So when we talk about the ball having been dropped on this issue, we mean all three municipalities,” said Mr. Boyd.

As has been reported previously, Oakville Enterprises Corp., which operates the local hydro generating station on the lake, has been found by the province of not being in compliance with the Kagawong River Water Management Plan. The Ministry of Natural Resources and Forestry (MNRF) had indicated that the generating station was operating when water levels were below the rule curve from July 10-26, 2018. “Starting July 23, 2018, MNRF received several public complaints regarding water levels on Lake Kagawaong. Upon receiving these complaints, MNRF requested water level and generation station operation data. The requested data was sent to MNRF by CIMA+ to Oakville Enterprises corporation on July 26, 2018, and CIMA contacted the township on that date to notify that the plant had been operating at water levels below the 2018 rule curve. MNRF also conducted a site visit to the dam on July 25, 2018. And there is documentation that this went on and on,” an MNRF letter to Billings council read.

“There are thousands of dollars in tax revenues being collected from citizens around the lake,” said Mr. Boyd. “We question why no one has been looking after the lake this summer.”

“We attended meetings with two of the municipalities, the ministry and the company that took over the generating station—prior to their taking over, and representatives of the company guaranteed us that the water levels would be monitored regularly, published online and accessible to all members of the public,” continued Mr. Boyd. “They are still using what amounts to a broken board on the Kagawong River for lake level readings. It is pretty pathetic.”
“Myself and other members of AKWA will be looking to see what the results of meetings the municipality is going to have with the company and the ministry,” said Mr. Boyd. “After that we will be discussing whether AKWA will be officially reactivated in the late fall or the winter.”

“We feel like we were blindsided on all of this,” said Mr. Boyd. “We had met with the company after they took over the lease contract from the municipality to operate the power dam, along with the municipality and staff and the ministry. They assured us and we were confident they would work within the lake level permit. Now we feel blindsided. Volunteer citizens shouldn’t have to help the regulators.”