MINDEMOYA—The fifth annual Manitoulin Central Family Health Team (MCFHT) golf tournament was again a huge success this year. The event was held at the Brookwood Brae Golf Course in Mindemoya this past Saturday.

“I would like to thank everyone for coming out today to participate,” said Lori Oswald, MCFHT executive director. “We’ve made some improvements in the format for the tournament this year, and hopefully everyone will come back again next year.”

Ms. Oswald explained the proceeds derived from the tournament will be going toward the MCFHT purchasing an “ambulatory blood pressure monitor” devicethat allows patients to have their blood pressures taken within the comfort of their own home.

Cheryl Seabrook gave a special thanks to all the hole sponsors and prize donors, Tom McQuay for volunteering to be the hole in one spotter on the fourth hole, and John and Cheryl Seabrook and the staff at Brookwood Brae.”

A total of 16 teams (76 golfers) took part in the tournament.

In the mixed team division, posting an 18 hole score of 65 (seven under par) in the best ball format was the team of Brenda Boyle, Steven Shelly, Tom Callaghan and Irene Callaghan. The ladies’ division saw the team of Deb Middaugh, Lorie Leeson, Marjorie Moody and Paula Dailey with a score of 77 taking first place. And in the men’s division the team of Jack Clark, Marc Addison, Mike Dubreuil and Tom Sasvari took first place with a score of 67. 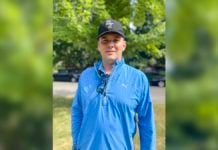