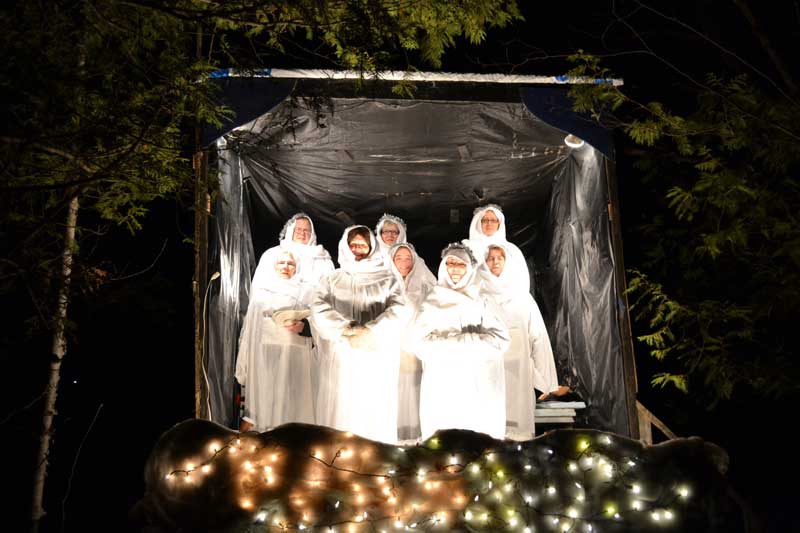 MINDEMOYA—The Journey to Bethlehem began with just the kernel of a dream of four clergy members coming from different denominations to hold a live ecumenical nativity play. That dream expanded to become an amazing community effort that has not only helped to build bridges between Mindemoya’s Christian communities, but has provided a wonderful Christmas tradition for people across the North Shore and onto Sudbury.

The cast sometimes changes from year to year, particularly since the baby Jesus is played by four local newborns (this year the central spotlight is shared by the babies of Rhonda and Kace Middaugh, Marlene and Nathan Verboom, Emily and Hudson Gosse and Cathy and Thomas Joyce). “We have four lined up, possibly five,” said Ms. Shaw. “It is always good to have a spare.”

Sadly, the recent passing of one of the actors who has traditionally played one of the Three Wise Men will create a change in the lineup, but someone has stepped up to fill the role. “That is the most amazing thing,” said Ms. Shaw. “It always seems that whenever someone isn’t able to fill their role, someone else is suddenly there.”

While travelling the route of the Journey to Bethlehem, it sometimes seems as if everyone in Central Manitoulin (and beyond) is involved in the effort, and that perception isn’t far-fetched. Not only are most of the community playing a part, but down through the years, dozens of people have added their skills, ingenuity and creativity to help make the production an outstanding effort.

The original four clergy members were from the Anglican, Roman Catholic, Missionary and United Churches that serve the Mindemoya area. Ms. Shaw recalled travelling to a live nativity show put on by the community of Bruce Mines and remarking on how wonderful it was. The idea was immediately embraced by the clergy. “They knew they wanted to do a group nativity play, but they had no real idea of what form that would take,” said Ms. Shaw. Time went by and she inquired of one of the clergy how progress on the concept was going. “That is when they said to me ‘I thought you were taking care of that’.”

Panic is a marvelous motivator, but ignorance can sometimes be surprisingly productive.

“It’s a real blessing that I really don’t know how to do anything,” laughed Ms. Shaw, as she related moments in the genesis of the production where community members have stepped up to create portions of the whole.

“For instance, I really enjoyed the market scene, but I had no idea how to to do something like that,” she said. She mentioned the market to the late Marion Seabrook and lo’ and behold “she said ‘I’m on it!’,” and one of the most popular scenes in the route came into being. So it went with piece after piece.

“I really did know nothing,” said Ms. Shaw. “I think that is why we wound up with so many people.” The concept quickly caught the imaginations of the community and people began to come forward to pitch in and make the Journey to Bethlehem the marvel it is today.

Ms. Shaw bridles at the suggestion that she is the “organizer” of the event, pointing out that so many people come together in a spirit of community to make things happen.

Although in years past a dinner, originally intended as a social event for the actors, has been held, this year the dinner is not being held. It turns out that everyone is just a bit too busy this time of year.

This year’s production of the Journey to Bethlehem begins at 6 pm to 8:30 pm on Friday, December 4 and concludes Saturday, December 5 from 6 pm to 8:30 pm. Parking for the event is at the Mindemoya Missionary Church, with a steady flow of shuttle buses ferrying those attending the event to and from the beginning of the Journey to Bethlehem at Our Lady of Conception Roman Catholic Church. For further information, contact 705-377-5283 or 705-377-5296.