This year’s target: All Island police services on Police Week

Once again, the Fudge Phantom has struck. This time the focus is on the police departments on Manitoulin. From the officers to the administration and support staff of United Chiefs and Councils of Manitoulin Anishnaabe Police, Wikwemikong Tribal Police Service and the Ontario Provincial Police, the Fudge Phantom supplied them all with the sweet treat. Assiginack municipal staff had the thrill of delivering the delicious fudge to the three Island detachments.

The Phantom states that they “just want the police family to know that the folks on Manitoulin are very thankful for their dedication and that they care and appreciate them.” It was further mentioned that the timing was perfect as May 9-15 was National Police Week.

The fudge was purchased from Northwest Fudge Factory. Owner Chantelle Gorham was a police officer with Greater Sudbury Police before turning in her badge to pursue her dream of running her own business. Ms. Gorham currently holds the Guinness record for the largest slab of fudge at 5,750 lbs and her two children, age five and 10, hold the record for world’s largest Nanaimo bar at 530 lbs.

When asked about the order for the police families on Manitoulin, Ms. Gorham stated, “I certainly recognize the sacrifices police officers make, not only in their personal lives, but in their professional lives as well.”

She went on to say she “was honoured to be asked to create something a little different to honour those that watch over us and thank the customer that ordered them for recognizing these everyday heroes.”

OPP Constable Marie Ford told The Expositor the gesture made the officers feel “really loved. It was such a kind and thoughtful gesture.”

Constable Ford said the fudge was chocolate with a “thin blue line,” paying homage to the officers. “It is such a nice reminder of how much care there is for us in our community and to recognize all of us on Police Week. It was a busy weekend and it was such a treat.”

It is with a heartfelt acknowledgement that Assiginack Township can echo the generous ratepayer’s actions and say that the police departments on Manitoulin deserve the appreciation and respect from all who live here, and are waiting patiently until the Fudge Phantom strikes again. 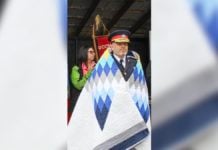