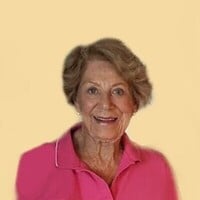 BARBARA JOAN “BJ” SCHUTTS
(UFFELMAN)
Mrs. Barbara Joan “BJ” (Uffelman) Schutts, 88, of Heritage Village, Southbury, passed peacefully with her daughter, Nancy, at her side, Thursday, October 13, 2022, at the Regional Hospice in Danbury, CT. Loving wife of the late Alan Arthur Schutts, Sr., BJ was born in Waterloo, Ontario, Canada on November 19, 1933. Daughter of the late Orly and Minota (Stauffer) Uffelman. She earned a bachelor’s degree from the University of Western Ontario and worked as a stewardess for American Airlines until meeting the love of her life, Alan, on a blind date. Barb and Al married in 1959. Eventually, they settled in Easton, CT to raise their family. They also bought land on Manitoulin Island in Ontario, Canada, where they spent summer holidays living in tents with their children as they developed the property and built their dream cottage over the years. After becoming empty nesters, they decided to move to The Landings, in Savannah, GA. In 2021, Barb moved back to CT be closer to her family. Barbara leaves to honour and cherish her memory her daughter, Nancy B. Schutts and her husband Paul J. DeLuca of Newtown, CT; a sister, Peggy Biedermann and her husband Glenn of Kitchener, Ontario, Canada; and her two grandchildren whom she loved and adored, Blayne Sapelli and his wife Peishu Han of China and Devin Sapelli of Fairfield and his fiancé, Brianna Theus of Brookfield; and several nieces and nephews. Besides her husband and parents, she was predeceased by a son, Alan Arthur Schutts, Jr. who passed away in July of 1984. A Celebration of Barbara’s Life will be held in the Spring of 2023, time and place to be announced. Memorial contributions can be made in Barbara’s memory to: Congregational Church of Easton or to Find Us Outside, the non-profit organization founded by Barbara, Alan andNancy Schutts.