KAGAWONG – Billings Township was recently notified it has been turned down for federal funding for its proposed Kagawong beach boardwalk and public washrooms project.

“There was a funding application that staff had pursued, but we received the bad news that that the application was not successful for the Kagawong beach boardwalk and public washrooms projects,” stated Billings Mayor Ian Anderson at a council meeting last week.

At a Billings Township council meeting earlier this month, Deputy Clerk Megan Bonenfant informed council that they had received an email from the Ministry of Infrastructure. Unfortunately, the township was not successful in its bid for funding under the community, culture and recreation funding stream of the Investing in Canada Infrastructure Program (ICIP).

The township had submitted its application for this funding in August 2019, for the total project value of roughly $1.1 million. It was pointed out that both the municipality of Central Manitoulin and the Town of Gore Bay were also unsuccessful in their applications to this funding stream. The project will be included on a future township asset management committee agenda to determine next steps.

“The intake fund included a total amount of projects submitted to $10 billion; however, the funding available under this program was not quite $1 billion,” said Mayor Anderson. “So we are not alone, even on the Island, as other communities have been turned down for funding under this program. But at least we are prepared for the next round of funding, and our application is ready when this funding is made available again in the future.”

In a letter to council, dated August 7, 2020, Julia Danos, director of intergovernmental policy with the Ministry of Infrastructure, told council, “I am writing to provide an update on the project that was submitted under the community, culture and recreation funding stream ICIP.”

“Following an evidence-based provincial review process, your project, Kagawong Beach Boardwalk and Public Washrooms, was not nominated for federal review and approval,” wrote Ms. Danos. “The provincial assessment criteria included reviewing projects based on community need, community support, lack of similar services accessible nearby, operational/financial capacity, value for money, asset management planning, whether projects were open to the public and efficiencies through joint projects. Your organization may be able to access other financial tools (e.g., IO loans) to support local projects.” 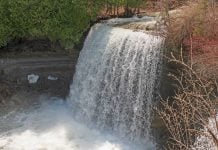