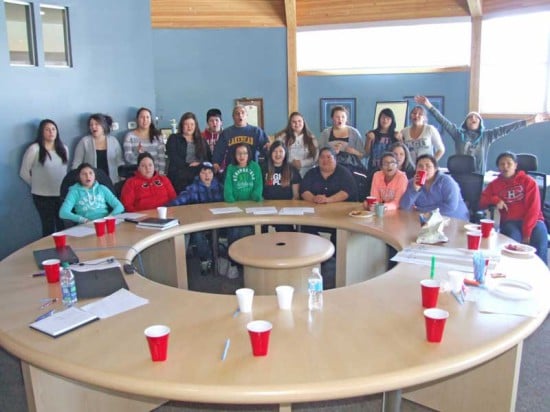 “This all started through a recent meeting the youth had with (Algoma-Manitoulin-Kapuskasing MP) Carol Hughes,” explained Chief Shining Turtle as he stood in the middle of the council chambers surrounded by students making posters, collating letters signed by community members and scanning documents to be faxed out to the 37 government ministers who sit at the federal cabinet table. “The youth discussed the various means they can use to make their concerns heard in a constructive and positive manner.”

The concept of a ‘fax mob’ came together through that meeting. “They have a goal of sending out 20,000 faxes by the end of today,” said band Councillor Cara Visitor, who stopped by the band office on Monday to lend a hand. Ms. Visitor explained that many of the youth taking part in the fax mob were veteran activists, having participated in Whitefish River’s successful campaign against the imposition of the HST value-added tax on First Nation purchases. “Some were involved in that so they are familiar with the concept of taking action.”

Many of the youth were also involved in recent Idle No More rallies and round dances both in their own community and the nation’s capital.

“This is a way they can take political action from their own homes and communities,” said Chief Shining Turtle. “They are harnessing the power of social media, Twitter and Facebook, as well as email and fax machines.” Each batch of letters forms a five megabyte file which is attached to an email and sent out to the relevant ministers.

The students were also manning the phone lines and placing calls to ministers’ offices to express their concerns.

Other communities have picked up the fax mob concept, noted Chief Shining Turtle. “We have heard from other communities, Serpent River, Couchiching, Nippissing First Nation, Timiskaming, Quebec and even the Grade 7 and 8 classes from the First Nation School of Toronto are joining our youth in this event,” he said.

Regional Chief Stan Beardy called into the band office to talk to the students and to congratulate them on their initiative.

Students have collected signed letters to the ministers from community members willing to sit down and sign each of the documents, scan the letters and compile the files.

“It took me about 35 minutes,” said one community member who was bundling up to head out into the minus 20 degree weather. “I don’t mind. It is something I can do.”

Chief Shining Turtle noted that focussing youth on positive representations to the government is preferable to alternatives such as taking a destructive approach. “It also provides me with the data I can use in my approach to the government to bring attention to those provisions the government is implementing that will have a negative effect on our community,” he said.

In addition to sending out the letters in email and fax, the original letters are being boxed up and sent out to the ministers with copies going to Ms. Hughes and to the Liberal Party of Canada. “The letters talk about vision and how things can proceed in a more positive manner for the country,” he said.

As to the response they have so far received, some students expressed dismay at the boilerplate replies.

“Please know that your email has been received and noted,” said Grade 12 student Crystal McGregor. “They put it in French too,” she laughed. Ms. McGregor sits on the Native Council at Espanola High School and has participated in the student parliament. She is looking forward to continuing her studies at Canadore College next year, where she will be studying Indiginous Wellness and Addictions Preventions.

“Our youth got many calls from MP’s offices (staffers) upset by our calls,” Chief Paibomsai noted in an email later in the day. “John Baird’s office was the most difficult on our youth.” Chief Paibomsai exchanged some heated words with the minister’s office on the students’ behalf.

The students planned to continue their efforts until all of the letters are sent out, likely sometime close to midnight. The main goal is to send out 20,000 letters, but at the present pace Chief Shining Turtle estimated the number might well exceed 35,000.

Students gathered for a pizza lunch before resuming their efforts and gathered for a group photo. “Idle no more,” replaced the standard “cheese” as the flash went off.

“It is important that youth know there are other ways to be politically active than taking over roads and malls,” said Chief Shining Turtle. “You have to share your vision to be effective.”

In the end, the effort did fall slightly short of the 20,000-letter target. “It overwhelmed our data storage capacity,” said Chief Paibomai. “But tomorrow is another day.”