MANITOULIN—Following the United Chiefs and Councils of Mnidoo Mnising (UCCMM) press release issued on June 17, asking that Manitoulin communities forego traditional Canada Day celebrations on July 1 in light of the discovery of hundreds of unmarked graves at the site of two former residential schools, the topic has been raised at almost of all of Manitoulin’s municipalities with many events being cancelled or moved to a later date.

The Little Current Business Improvement Area (BIA) was the first to announce the cancellation of its activities in downtown Little Current in support of its First Nations friends and neighbours, followed by Assiginack council.

Central Manitoulin council passed a motion at the June 24 municipal council meeting, moved by Councillor Dale Scott and seconded by Councillor Al Tribinevicius, to recommend to the Discovery Centre Board they delay the annual July 1 fireworks display as “a show of solidarity standing together with the United Chiefs and Councils of Mnidoo Mnising for the lost and missing Indigenous children in Canada and further that the Discovery Centre Board chose another day for the fireworks display.”

The Town of Gore Bay will be delaying its Canada Day fireworks until Saturday, July 3 on a request from the town’s fire department (who will be putting on the event), noting that the decision is not due to the UCCMM Tribal Council request.

“On the Canada Day celebrations there have been a lot of questions from the local press and CBC if we will be cancelling Canada Day activities,” said Gore Bay clerk Stasia Carr at a town general government committee meeting last week. “We were asked for a statement and all I indicated is that we have a kids’ art contest with the theme of what Canada means to them.”
“As for the request for Canada Day being cancelled, I don’t believe cancelling Canada Day celebrations will make an impact on what has happened in the past,” stated Gore Bay Mayor Dan Osborne. “What happened (at residential schools) is definitely tragic. Canada Day is about celebrating Canada, everything good and bad that has happened in the past history and learning from our past mistakes. Let’s learn from our past mistakes, recognize what has happened and let’s all move forward together.  We’re all neighbours.”

Councillor Jack Clark pointed out the town fire department was still planning to hold its fireworks and initially the group planned to have this take place on Canada Day. However, due to manpower and scheduling conflicts they had opted to shift the fireworks from July 1 to July 2, but would still have problems finding enough firefighters to set up the fireworks.

“They (fire department) have asked us to consider bumping the fireworks to Saturday, (July 3),” Councillor Clark told council. “This takes us away from having celebrations on Canada Day, per se, but when you consider all the time the volunteer firefighters have to put toward just setting up the fireworks, and in their normal duties as volunteer firefighters, I would recommend we agree with their request.”

“I don’t support not celebrating Canada Day from a political point of view,” said Councillor Clark. “But I am in favour of the request from the fire department to hold the fireworks on Saturday.”

Northeast Town council held a special meeting Monday night, June 28, to discuss Canada Day events. As was explained by CAO Dave Williamson, following the cancellation of the Little Current BIA activities, municipal staff decided to move forward with a July 1 event geared toward children and families at Low Island park. Staff felt that since the event was geared toward children, and staff would all be dressed in orange t-shirts, recognizing the children of residential schools, the spirit of the event would be respectful.

However, following conversations with UCCMM Tribal Chair Patsy Corbiere over the weekend, Ogimaa-kwe Corbiere asked Mayor Al MacNevin to postpone or cancel the Canada Day activities as she was fearful for everyone’s safety, Indigenous and non-Indigenous alike. Mayor MacNevin said Ogimaa-kwe Corbiere has been receiving hate mail since the UCCMM press release was issued earlier this month.

Councillor Michael Erskine reminded council that both communities are going through “serious traumatization” in having to face Canada’s “very dark reality … This is having an impact on everyone, non-Indigenous too. I read the press release as (the UCCMM) wanting us to stand in solidarity with them.”

“Chief Corbiere is a wonderful individual who does not want to inflame or create chasms—she’s not one to divide,” Councillor Erskine added.

Councillor Bill Koehler said he would not support any events on Canada Day. “We are one group of people, one big family. We need to stand in solidarity.”

Councillor Al Boyd said he agreed with his fellow councillors, noting he was saddened and horrified to learn of the discovery of yet more unmarked graves, “and this is just the start.”

Councillor Laurie Cook added her voice to those offering support to the UCCMM.

A motion to cancel Canada Day activities in solidarity with “our Indigenous neighbours” was moved by Councillor Erskine and seconded by Councillor Koehler. The motion was carried. 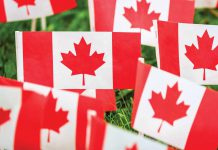 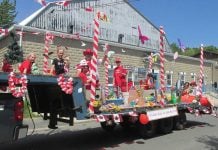 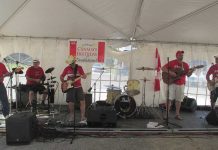 Legion starts off Canada Day festivities on the right foot 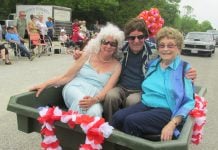