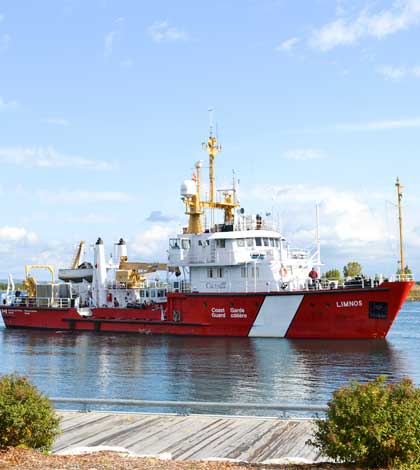 MANITOULIN—The Canadian Coast Guard (CCG) will be looking to the private sector to take over the management of buoys in the Manitoulin area.

“The CCG intends to engage the private sector for the laying and lifting of buoys of 1.4 metres or less in diameter,” Melanie Carkner, a media relations advisor with Fisheries and Oceans Canada, told to The Expositor last week. “Most of the buoys in the Manitoulin area are covered under this initiative. The work will provide business opportunities to the successful bidders, enabling them to diversify their sources of income.”

The CCG has been holding meetings across Canada, such as a recent meeting in Parry Sound, soliciting feedback from private companies interested in taking over buoy management.

“There will be no change in the service Canadians and mariners receive, only in how the service is provided,” Ms. Carkner assured. “CCG vessels CCGS Caribou Isle and CCGS Cove Isle will be removed from service as a result of this initiative. These vessels are currently scheduled to remain in service until March 2014. Other work unrelated to buoy tending carried out by these vessels will be taken over by other CCG vessels.”

Ms. Carkner explained that decommissioning a vessel is a “necessary part of the evolution of the CCG fleet.”

“The Government of Canada has made significant investments in the Canadian Coast Guard to ensure the men and women of the Coast Guard have the tools they need to do the work we ask of them,” added Ms. Carkner.

“The CCG will continue to maintain a strong presence in the area,” continued Ms. Carker. Specifically Aids to Navigation work will continue to be carried out in the (Manitoulin) area by the CCGS Cove Isle and CCGS Samuel Risley (often seen around Manitoulin breaking ice in the spring). On occasion, the CCGS Griffon may also be seen operating in the area. One of the fleet’s newly acquired mid-shore patrol vessels, Constable Carriere, will operate in the northern Lake Huron and Lake Superior areas. The CCG also has one 47-metre life boat stationed at the CCG station in Tobermory and one in Meaford on Georgian Bay. CCG’s science vessels are also occasionally in the area.”

The Canadian government will be accepting buoy bids between December 2013 and February 2014.