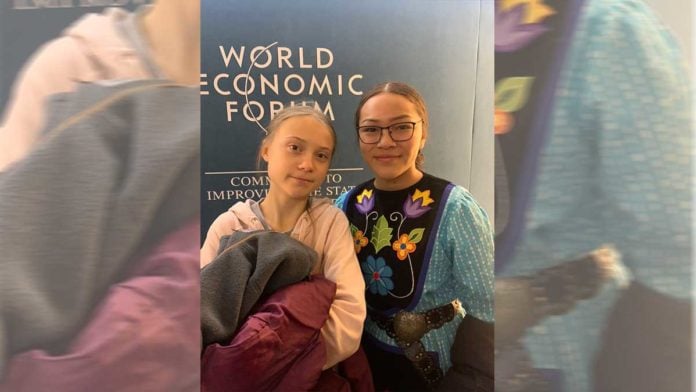 OTTAWA—Wiikwemkoong water rights advocate Autumn Peltier is featured in a new display at the Canadian Museum of History in Ottawa.

“From November 15 to January 8, 2023, the public will be able to learn more about this young Indigenous woman, who is a world-renowned water-rights advocate and leading global youth environmental activist, from Wiikwemkoong Unceded Territory. The display features items related to her international advocacy for clean water rights, including the dress she wore when she addressed the United Nations General Assembly in March 2018 about the issue of contaminated water on Indigenous reserves across the country.”

“When she was eight years old, Ms. Peltier attended a ceremony at Serpent River First Nation and saw boil water advisory signs in the community,” wrote the CMH. “This inspired her to fight for the right to safe and clean drinking water, whether on reserves in Canada or in the developing world. In 2016, at only 12 years old, her activism led her to a high-profile exchange with Prime Minister Justin Trudeau where she called on him to ‘protect the waters’ from pipeline development.”

“Ms. Peltier’s activism connected to water rights is inspired by her community’s teachings, especially those of her mother and her great aunt, Josephine Mandamin, a well-known Indigenous water activist in the Great Lakes region who was the Chief Water Protector for the Anishinabek Nation until her death in 2019. After her great aunt’s death, the Anishinabek Nation selected Ms. Peltier as Chief Water Protector and Commissioner,” continues CMH.

“Ms. Peltier has been honoured with numerous Canadian and international awards for her activism, including multiple nominations for the International Children’s Peace Prize. This year, she was one of three finalists for the award, the first time a Canadian has made this final stage.”

From November 15 to January 8, 2023, the public will have the opportunity to view objects on loan from Ms. Peltier, as they will be on display in the museum’s special exhibitions corridor. After that, the objects will be featured in the Canadian History Hall.