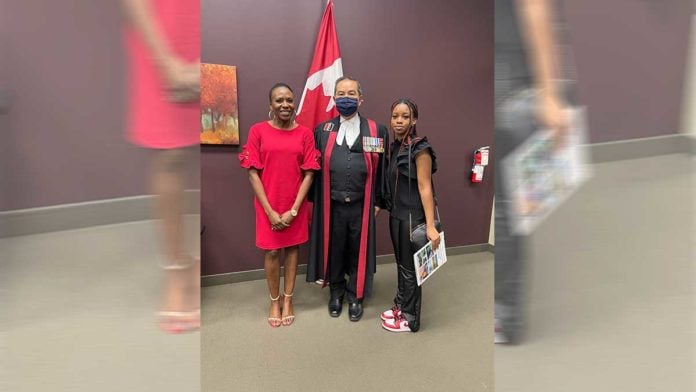 TORONTO—Theresa Phiri and her daughter Jade were profiled in New-ish to Manitoulin earlier this year when the column chronicled their challenging multi-year journey from the heart of Africa to the west end of the Island. Their story has recently taken another inspirational twist with the news that Theresa and Jade became new citizens of Canada on November 16.

Theresa made a whirlwind trip to Toronto, where she originally settled upon arrival in Canada in 2008, to join her daughter who’s studying at Metropolitan University. They were among the newest group of newcomers to our country who participated in a citizenship ceremony–something Theresa had longed to do since becoming a permanent resident but was unable to afford as a single mom struggling to make ends meet. That changed when she moved to Gore Bay in 2018 and her family’s fortunes changed. With a good income and a more affordable lifestyle, Theresa was able to save the $700 necessary to cover her citizenship application while she could still claim Jade as a dependent child at no additional cost.

“It was a dream come true and I can’t believe how emotional it was for both of us,” says Theresa. “There was a recorded message from the Prime Minister welcoming us to Canada, acknowledging our struggles to get here and applauding us for our success. The citizenship judge also gave a moving speech, telling the children in the audience to be grateful for their parents’ sacrifices, leaving behind everything they knew, and to seize this opportunity to make the most of their lives. I cried almost all the way through the ceremony! It was like watching my life flash before my eyes with all the trials I’ve overcome since leaving Africa.”

Theresa says she feels she is starting a new chapter in her life, putting her immigrant past behind her and forging a new and better life as a Canadian. She is especially anxious to be able to vote and participate fully in Canada’s democracy. “I feel I can have an impact by having a say about Canada’s future.”

Theresa is determined to have a beneficial impact on her community and new country and keen to give back in thanks for all that Canada has given her. An aesthetician, Theresa hopes she can “give love to people through my hands and skills to improve their lives. even if only in a tiny modest way. I know I’m just one person, but I also know that one person throwing a stone in a lake creates ripple. I am optimistic that my daughter and I may eventually make waves.”