M’CHIGEENG—This year’s M’Chigeeng Powwow held over the Labour Day weekend included participants and vendors from across Ontario and as far as Vancouver, including ultramarathon runner Caribou Legs and the benevolent Redrum Motorcycle Club.

Caribou Legs was originally from Inuvik, N.W.T. but he has since moved to Vancouver. The Gwich’in runner visited Manitoulin Island for the first time last weekend. He decided to stop in as he completed his third cross-Canada run to support Missing and Murdered Indigenous Women and Girls (MMIWG) and advocate for raising youth with traditional values. Caribou Legs said he runs for nine months of the year, resting in February, March and April.

“There’s 3,100 reserves in Canada. I want to run to every one,” he said, adding that he likes to end each run on a reserve or other sacred Indigenous place. His daily average is between 75 and 100 kilometres.

“I’m trying to build up our wounded people,” said Caribou Legs. “We’re too colonized today. We need to get back to our traditions. Too many of our kids want to become gangsters, when we should be raising them to be warriors.”

When he visits Indigenous communities, Caribou Legs speaks with groups such as schools, prisons and drug/alcohol treatment centres to remind them of traditional teachings. Along highway stretches, he has enjoyed stopping in Tim Hortons locations to share stories with patrons to foster reconciliation.

Caribou Legs was on hand to participate in dances around the powwow arena, as well as offering to paint kids’ faces and toenails in the style of his own war paint. He said the design came from artist Jackie Traverse in Winnipeg, who allowed him to reuse it. Caribou Legs’ next stop, after an overnight rest on the Island, was Sudbury.

Redrum Motorcycle Club helped Caribou Legs for part of his journey. The group is an international club with chapters as far away as Morocco. It is an Indigenous group that rides to support communities in need, both Indigenous and non-Indigenous.

Spirit Island Redrum president Robbie Shawana addressed the crowds gathered under the arbour, promoting the club’s message of “spreading positivity on two wheels.” Their ride was a fundraiser, with proceeds going to the Manitoulin Good Food Box program. Last year’s contribution was a little over $4,000 and Mr. Shawana said he hoped to beat it this year.

Before Grand Entry, elders held a special ceremony at the sacred fire for Jeanette Migwans-Scott. She received her spirit name: Biia Waabonikwe, which roughly translates to Early Riser in the East Woman. After receiving her name, she walked around the powwow grounds with an offering of strawberries to introduce herself to the community.

Despite the threatening skies, only a few scattered drops of rain fell in the morning. The sun occasionally peered through the clouds in the afternoon, but the fairly consistent cloud coverage kept temperatures relatively cool throughout the day. The dancers certainly appreciated the break from this summer’s heatwave. 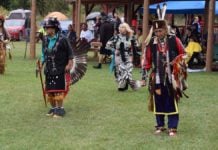 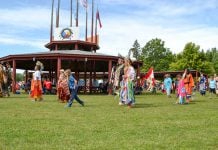 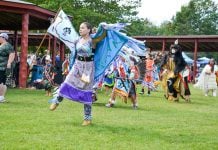