AUNDECK OMNI KANING––Purple was chosen as the 2018 Pantone Colour of the Year. This complements the International Women’s Day (IWD) #PressforProgress campaign theme which highlights “feminism and international efforts to achieve wide-scale gender parity.” Pantone selected “ultra-violet” to communicate “originality, ingenuity and visionary thinking that points us towards the future.”

According to Pantone, purple was initially associated with efforts to achieve gender equality during Britain’s women’s suffragette movement in the early 20th century. In the 1960s and 1970s use of the colour purple was revived by feminists to represent the Women’s Liberation movement. Now widely associated with contemporary feminism, the colour purple symbolizes achievements gained and achievements yet to come.

It was fitting that the décor at the IWD dinner celebrating the women of Aundeck Omni Kaning (AOK) was purple.  Jo-Anne Thibodeau-Audette was organizer and host of the event.  She wanted to celebrate each and every woman in AOK on the day that women all over the world celebrated International Women’s Day.

“Women are amazing,” Ms. Thibodeau-Audette told the gathering. “Women from Aundeck Omni Kaning are incredible. We have accomplished so much in our little corner of the world, and I think it’s high time you all get recognized for the great work that you all do.”

She noted that Indigenous women are at a higher risk of experiencing violence. “Traditional attitudes have marginalized Indigenous women,” she said, “and we are here to say no more. Our lives do not get easier or more forgiving but we become stronger and more resilient. Indigenous women have a long tradition of resisting colonial domination and racism. We fight for the survival of our people, our families and our communities, and we organize to demand our rights as Indigenous women. As women from Aundeck Omni Kaning, we are part of that resistance.”

Following a delicious roast beef dinner prepared by Elliott’s Catering, a blanket ceremony to honour several AOK women was held. Chief Patsy Corbiere, currently serving her third term, was honoured, as were two previous women chiefs: AOK’s first woman chief Joanne Esquimaux and Diane Abotossaway. “The role of chief is not easy,” said Ms. Thibodeau-Audette. “It is hard work that requires a strong heart, a strong mind, and dedication to your people and to the next generation. These women and their visions have helped shape our community and brought us to where we are today.”

Two women who have demonstrated heroism were also honoured. Beverly Abotossaway’s son Gabriel was in a horrific car accident that left him paralyzed but she never gave. She rallied by his side then and continues to do so every day. Florence Nahwegahbow risked her own life to save the lives of children, who have since become amazing women themselves. “Beverly and Florence are true super-heroes and have proved to the world that they will stop at nothing and will do whatever needs to be done to save lives,” explained Ms. Thibodeau-Audette.

“As Indigenous people we value our elders,” she continued. “We value the experience that comes with age and are always saying we must respect our elders. There is wisdom that comes from elders. When you are in the presence of an elder, make sure to listen more and speak less. An elder’s words come from a place with many decades of experience.”

The elders that were honoured with a blanket were Annie Breyer (AOK’s oldest community member), Lorraine Kozeyah, Ursula Madahbee, Norma Assinewai and Elaine Nahwegahbow. “You all have given us more than 375 years of teachings and wisdom combined,” said Ms. Thibodeau-Audette.

These women were honoured with a star blanket on behalf of AOK First Nation. The star blanket that was used represents honour, protection and ceremony. “To give a blanket is to demonstrate great respect, honour and admiration for an individual. When receiving a blanket as a gift, the giver holds the individual in very high respect for their generosity and accomplishments. It is believed that receiving a blanket will bring good dreams and prosperity. When a blanket is placed on an individual it is like wrapping the respect and admiration of everyone in the community around them physically and spiritually.”

Ms. Thibodeau-Audette concluded by encouraging women to appreciate each other more, to be more understanding and grateful for one another. Most important, she urged women to take time for themselves. “While we are busy balancing work, school meetings, appointments, social events and so on, we tend to forget about ourselves,” she said. It is okay to take a breath, and okay to put yourself ahead of others, she explained. “This day is for you. This day is all about you. Thank you for being a woman and thank you for everything you do.” 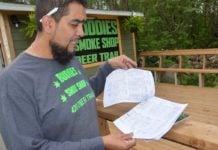 Tom Sasvari - September 22, 2021
KAGAWONG - Patrons of the always popular Christmas in Kagawong celebrations, which had been held for the past 27 years, are decrying the announcement...