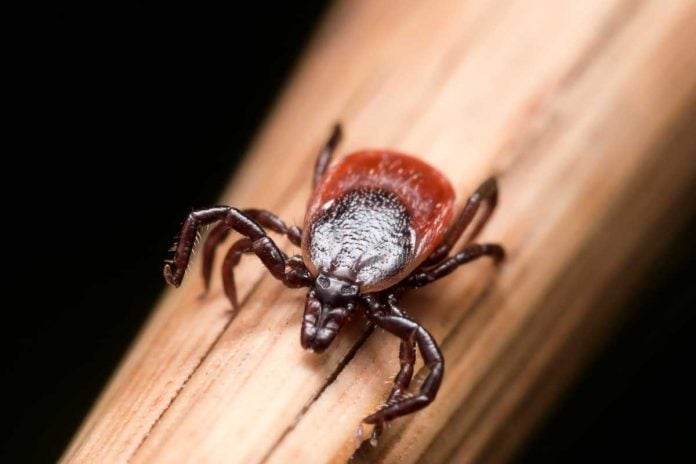 MANITOULIN – Nine years ago, Algoma-Manitoulin MPP Mike Mantha met a grandmother from the community of Manitouwadge who had assumed care of her granddaughter because her daughter suffered from chronic Lyme disease. “That was my introduction to Lyme disease,” he said. “The disease had progressed to where the daughter could no longer care for herself or her child.”

He was shocked by how physicians were treating individuals that were experiencing chronic Lyme disease symptoms and reached out to advocacy groups such as Ontario Lyme Alliance, Canadian Lyme Disease Foundation (CanLyme), Ontario Lyme and the G. Magnotta Foundation. “This is not just one individual out of Manitouwadge,” he said. “This is hundreds of thousands of people across Ontario, across the country and around the world. This is a global issue, and it absolutely is debilitating.”

There is a great deal of misinformation out there, said Mr. Mantha. Healthcare professionals tended to look for the obvious sign, the bullseye rash, but only a small portion of individuals who are bitten by an infected tick show the rash. If the rash was not present, the individual was treated for individual symptoms. Lyme disease presents with nearly 100 different symptoms that can include fatigue, fever, headache, problems with vision or hearing, muscle soreness and joint stiffness. It is difficult to diagnose.

“One of the things we know about Lyme disease is it’s the great imitator,” he said. It imitates many other diseases and can hide itself within muscle tissues, and without proper testing it won’t be picked up quickly. Patients are told they do not have the disease and by the time it is diagnosed, they have progressed into the chronic stages.

Mr. Mantha was a member of the Lyme Disease and Tick-borne Illnesses Task Force. “Across the province over the course of several years, I’ve met and heard of individuals who have gut-wrenching stories regarding the lack of care, of the frustration at being turned away from health care, of being told this was all in their minds,” he said. “These stories are real.” The task force was struck to address a lack of literacy and understanding about what Lyme disease is and how to address it. The task force issued 10 recommendations in a report released in April 2018. A major recommendation was the establishment of treatment centres of excellence. The centres would establish best practices and recognize the chronic stages of Lyme disease. The acute stage is recognized by healthcare providers, said Mr. Mantha, but there is still ambiguity about the processes and treatments for chronic Lyme disease and the protocols in place for healthcare providers to follow.

“There still needs to be directives from this government to our healthcare providers as to how they should be treating patients who show signs of Lyme disease,” he said, “because this illness is more and more evident. It is moving into our communities, particularly in Northern Ontario.” Individuals who will be affected by Lyme disease need to know the resources and treatment centres are available to them. “Presently people are being financially burdened by having to go to other jurisdictions to get care which should be available to them here, not only in Ontario but in Canada.” He’s heard stories of people that have travelled to Germany, Belgium, France and the United States to obtain treatment. “They’re returning with better health, a better ability to function. The care is there but we need to make it available in Canada.”

The blacklegged tick (I. scapularis) is the tick that carries Borrelia burgdorferi, the bacterium that causes Lyme disease. Lyme disease is the most common tick-borne disease in Canada although others are emerging that are also due to the effects of climate change.

Until 1997, Long Point in southern Ontario was the only known location in Canada with an established population of blacklegged ticks. By 2006, there were still only seven established populations in Canada; six in southern Ontario and one in Nova Scotia, all located in the warmest parts of these provinces. It has now been reported in every province.

An April 2019 report published by the Public Health Agency of Canada (PHAC) in the Canada Communicable Disease Report noted it is “widely acknowledged that the increase in temperature associated with climate change has contributed to a general increase in the number, types, level of activity and geographical distribution of ticks in North America” and has directly contributed to the northward spread of blacklegged ticks and Lyme disease into Canada, resulting in a rising number of reported cases of the disease. The incidence of Lyme disease rose from 144 in 2009 to 917 in 2015, according PHAC.

Rising temperatures is the key factor in the increase as it has improved the conditions necessary for tick survival. Other factors include expanded distribution ranges of tick hosts such as rodents and deer, and increased human outdoor activity leading to a greater human exposure to ticks.

“With climate change we’re assuming there will be an increase in vector borne diseases from ticks and mosquitoes such as Lyme disease and West Nile,” explained Adam Ranger, environmental support officer with Public Health Sudbury and Districts (PHSD). “They’re getting worse because the environment will continue to become more optimum for them. Blacklegged ticks do come from migratory birds but the main cause is overwintering. In the past, winters have been cold enough so the eggs of that particular species didn’t survive but with climate change, if the winters do get milder and shorter then there’s an increased chance of them being able to overwinter which would therefore in theory increase their population.”

There has been one tick from Manitoulin Island submitted to PHSD for testing so far in 2020. It was a blacklegged tick but test results (for the bacteria that causes Lyme disease) are not yet available. Mr. Ranger said six ticks have been sent in for testing from the region but PHSD numbers don’t necessarily reflect how many are actually in the communities. “An outdoors person who get ticks on them all the time they might not be inclined to bring it in versus a parent who just found a tick on a child.”

While warmer winters may increase a tick population, hotter summers could potentially harm them. Ticks are sensitive to heat, explained Mr. Ranger. “They’re more active in the first part of the morning and later on at night because of the sun. They can dry out.” Extreme heat and dry conditions are not ideal conditions for ticks because they can’t escape the heat and can die off.

“There’s a tipping point,” he continued. “Weather is one factor that encourages people to go outside.” When more people are outside, more people are potentially being exposed. “This year, because of the physically distancing and everything being closed, I think camping and gardening might be the in things this summer.”

Prevention is key and it’s quite easy, according to Mr. Ranger. “We’re encouraging people to continue their physical activities,” he said, “but recommend wearing light coloured clothing, long pants tucked into socks and long sleeves. The contrast allows for easier detection of ticks.”

“This also works well for dealing with mosquitoes and you’re not exposing your skin to UV rays,” and adds a layer of protection if you are applying bug repellent containing DEET, which PHSD also recommends, as you are not applying it directly onto your skin. DEET repels both mosquitos and ticks, he said.

“All the explorers wore long pants that folded into a cuff and wore collared shirts,” Mr. Ranger noted. “The clothing was designed for that purpose. They would pull back that cuff or the collar and that’s where they would find the ticks. So, we also recommend that you wear collared shirts such as polo shirts.”

He explained that ticks don’t jump at you or fly at you, but simply wait in the tall grass or brush waiting for you to pass by. They will cling to you but don’t necessarily bite right away. “They actually do spend time on the body trying to find the ideal location.” This means there is time to locate ticks after being outdoors. It takes about 24 hours for the tick to pass on the bacteria to you. PHSD recommends people perform a tick check after spending time outdoors and to bathe immediately, if possible. If the tick has not attached yet there is still time to wash it off your skin.

“People that are affected by Lyme disease have compromised immune systems,” Mr. Mantha noted. “So COVID-19 has heightened the awareness and worries of people that are affected by Lyme disease. We are all looking at going outside of our homes, of getting some type of relief by walking the trails or going out in the bush. We want to enjoy nature’s treasures that we have an abundance of here across Northern Ontario.” He too is reminding people to protect themselves, be aware of one’s environment, be informed and know the signs. “When you come out of your nature walk or off a golf course, even if you’ve gone fishing, do a tick check. Look in your crevices, look over your children, look over yourself and look over your pets.”

If you do find an attached tick, it needs to be removed as soon as possible, but it must be removed without leaving any parts of the tick in the skin as that could cause a secondary infection. Use a tick remover or fine tipped tweezers that you place on either side of the tick where it is attached, pulling straight back. Wash the area with soap and water. Put the tick in a clean plastic container and call PHSD for instructions on testing (toll-free 1-866-522-9200).

Call your health care practitioner immediately to discuss potential treatment. The good thing about Lyme disease, said Mr. Ranger, is that if caught right away and you begin antibiotic treatment, Lyme disease is extremely treatable in the early stages. Don’t wait for test results. It may be too late.

Public Health Sudbury and Districts reported that a tick has tested positive in the City of Greater Sudbury for Lyme disease this spring.