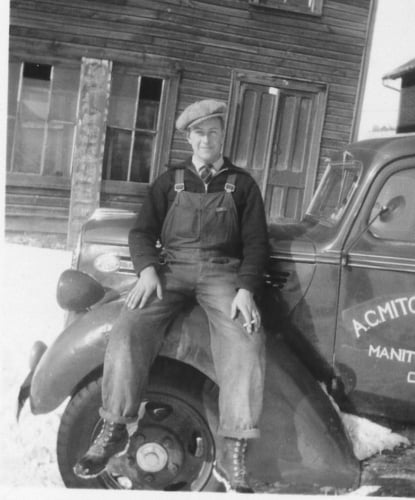 CLIFTON ANDREW MITCHELL
May 30, 1925 – April 14, 2020
The family is saddened to announce the passing of Cliff at the
Centennial Manor on Tuesday, April 14, 2020 at the age of 94. Predeceased by parents Mary and Alexander Mitchell. Beloved husband of Muriel Jean “Pat” Mitchell (predeceased). Loving father of Judy Hales Mitchell. Caring Grandpa of Janice (Ed) Foster. Great-grandfather of Cole and Joshua Foster. Special brother of Shirley
(predeceased), Phyllis (predeceased) and Janet of Sudbury. He will also be missed by many nieces and nephews. Cliff was a “man of the land.” He was born on the family farm and had a love of farming which included the “cream runs” with his Dad. Cliff’s fondness for farming included the
family dog, there was always one nearby . Cliff had several over the years and each was special to him. He was a
devoted bus driver for many years and had a special bond with the children he was entrusted with on a daily basis. He made sure they arrived to and from school safely with
kindness and devotion. There was not a person Cliff met that he did not like. He did like you more if you drove a Ford! He was a Mason in the Little Current Branch for many years and had an avid interest in curling. Cliff never stayed idle for long. At the age of 93 he still enjoyed moving the snow with his tractor in the winter and grading his driveway in the summer. Cliff had the smoothest driveway in
Manitowaning! A private family service will be held.