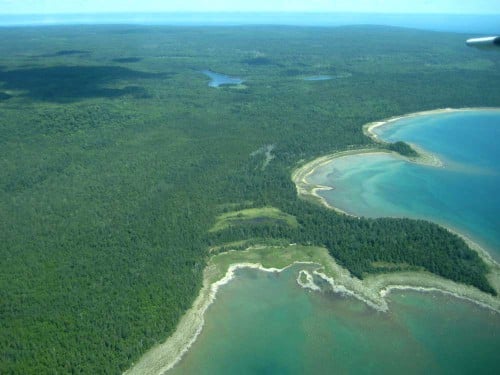 COCKBURN ISLAND—The reeve of Cockburn Island feels that township council will be able to work with the community and the Nature Conservancy of Canada (NCC) to come to a satisfactory resolution to concerns with the proposed purchase of 22,000 acres of property by NCC.

“I’m more positive about the whole issue after our meeting (with John Grant of NCC) last week,” said David Haight. “I think we will be able to work with them and the community to make all of this work.”

As reported previously, the NCC announced it is looking to purchase these lands for conservation. NCC must raise a remaining $5 million in gifts and pledges by mid-December in order to purchase the property.

After the announcement, concerns had been raised by Cockburn council, area groups and individuals, including those on Manitoulin, about whether the land would become tax exempt, leaving a tax burden on local residents and with traditional land use remaining intact.

Mr. Haight said the two main issues of concern that have been raised thus far with the proposed purchase of land is in regards to tax exempt status––NCC not having to pay municipal taxes if they are approved for tax exemption status on the lands they purchase. This would leave the municipality footing the bill. The second main issue concerns the use of land owned by NCC for hunting and all-terrain vehicles.

“The meeting went very well, and basically Mr. Grant confirmed everything the NCC had confirmed in a recent letter to council,” said Mr. Haight. The letter stated that it is not the intention of NCC that municipal revenues would be diminished and that there would not be substantial changes made to traditional land uses.

“I thought the meeting was very good. Council asked many good questions and we are open to listening to more responses on the questions,” said Mr. Grant. “We talked about more than the key issues addressed in an open letter to the local papers that James Duncan (Regional Vice-President, Ontario) had sent. And the issues and councils position has all been set out in a resolution passed by council after our meeting last week. And there is a commitment on both parties to talk through all the issues.”

“We are still working on the tax exemption issue. We need to look closer at this, but they (NCC) have said whatever is not provided by the province (with loss of taxes) they will come up with any difference there may be they will help us,” said Mr. Haight. “We won’t be losing a lot even if they get tax exemption status, and what difference there is the NCC has indicated they will make this up.”

“As for uses of the property, they are going to work with us and get our input and comment on all uses we want to see take place in the master plan, including, for instance, hunting, ATVs and trail use,” continued Mr. Haight.

“I’m a lot more positive on this whole thing, we still have to look at things, such as on the tax side, to clarify (where things actually stand),” said Mr. Haight. “We will still own a lot of unopened road allowances and marine road allowances on these lands.”

Council passed a resolution at its meeting last week, “that council responds as follows to the NCC proposal to acquire approximately 22,000 acres of Cockburn Island property. One, to acknowledge NCC’s intentions to preserve these lands in a fashion consistent with Cockburn Island goals including a minimal new human impact and allowing the forest to mature to old growth; two, that past and historical practices to continue more or less the same as now; three, that NCC to welcome input from council to develop a property management plan; four, to cover any net revenue gap as the result of tax exemptions received; and five, that Ministry of Finance assistance be sought to determine the impact on the OMPF (Ontario Municipal Performance Fund) grant and shared programs such as public health, social services, policing, etc.”

Mr. Grant, discussing each point individually in the council resolution, on the first point said that, “I was pleased with their resolution overall. It seems their vision and the NCC vision for the land we are hoping to acquire is very compatible.”

On point two (maintaining historical practices to remain the same), “this is correct,” said Mr. Grant. “That’s right. They appreciate NCC will want to consider trails in sensitive areas, perhaps being rerouted, but the general principles in place now for trails and uses existing on the lands currently, will continue.”

As for NCC getting input from council and the residents on developing a property management plan, “It seemed there was agreement by both parties that there is so much to be gained by working together,” said Mr. Grant. “We want to get off on the right foot by involving community participation in planning. It makes sense. There is a wealth of knowledge in the community of uses past and present and we want to get this input to achieve a common vision.”

As for NCC covering any net revenue gap as the result of any tax exemptions received, and Ministry of Finance assistance being sought, as outlined in the fifth point of council’s resolution, Mr. Grant said, “as a general principle we will not be making any major decisions without discussion, input and comment from council. We looked at the Managed Tax Forest Tax Incentive program, but the township will first want to determine and get input on their net revenues before getting back to the NCC regarding important net revenues to townships, and before we make a final decision. The key point is we are waiting on them (council) to contact the Ministry of Finance as to the impact this would have on their net revenues before making a decision. However, our objective is to ensure there is no greater tax burden on other taxpayers as a result of this project and we will work with council to find the best way to achieve this objective.”

“A key point of all of this is that for us, our focus is closing this deal by December (raising $5 million by mid-December),” said Mr. Grant to which, “we are making good progress. I think Cockburn Island may be different than Manitoulin Island in some respects. The interests of Cockburn may be somewhat different than Manitoulin. I am more confident after meeting council that this will become great for the NCC and the community.”

Bill Strain, of the Little Current Fish and Game Club said that Cockburn Island Township should be cautious in what they are being told by NCC officials, relating to concerns that arose when the NCC took over Strawberry Island Park.

“We were asked between 8-10 years ago about traditional uses by NCC. We had concerns that if they took over Strawberry Island whether uses such as trapping/hunting would continue to be allowed. We were told that, yes, they would continue by Allan Stacy (NCC),” said Mr. Strain. However, when that fall came around Mr. Stacy was nowhere to be found, but I was told that Ontario Parks had taken over management and there would be no hunting allowed, except by Natives. Cockburn is exactly where we were when we started; what happens when NCC takes over property and they get tax exempt status and don’t want to pay taxes. They could turn it over to Ontario Parks and there would be no traditional uses and no taxes paid.”

Rick Gjos, another member of the club, told The Recorder, “I remember the meeting we held with the NCC and we had indicated we wanted specifically to be able to still hunt, skidoo, have trails, and they said everything was going to remain status quo. Then when they purchased the property they transferred it over to Ontario Parks and all of this changed. And when they (NCC) purchase a property like this it is not just that property but the buffer zones around the property that you can’t do anything on them.”

On the concerns raised by the LCFGC representatives, “I’d have to talk to these gentlemen and research it,” Mr. Grant responded. “But in this case the NCC will own the property. We have no intention of transferring this property to the Ontario government or any other agency or owner. I think it is important to get this out there. In the long term we look forward working with the people of Cockburn Island for generations to come. I should also point out, at least some of the council members like the idea of their great grandchildren being able to experience the old forest growth similar to that their great grandparents would have seen when settled here (Cockburn),” added Mr. Grant.