“It’s going to be hugely significant,” says Tehkummah Fire Chief Jeff Wilson. He says the two groups donated included a wall mount and a sound bar so the television can be clearly seen and heard by everyone in the room.

“We decided to do a 50 percent donation and meet (SSFA) halfway on the costs,” says Adam Smith, owner of Jake’s Home Centres. He says his company has often gotten involved with community projects.

Michael Brown, president of SSFA says his organization supports firefighters and fire victims in the southeast region of Manitoulin.

Chief Wilson says the main reason for the new equipment is to help facilitate mandatory training sessions for crew members.

“As of July next year, there’s all these new regulations that we will have to meet in order for people to be on the fire department volunteering and going to fires,” says Chief Wilson. “Training is becoming more significant.”

Previously, the fire department used a small television on a stand that could roll around to where it was needed.

“It was small and hard for people to see if they’re at the back of the room or sitting behind somebody,” says Chief Wilson, noting the new television is mounted near ceiling height to eliminate obstructions. 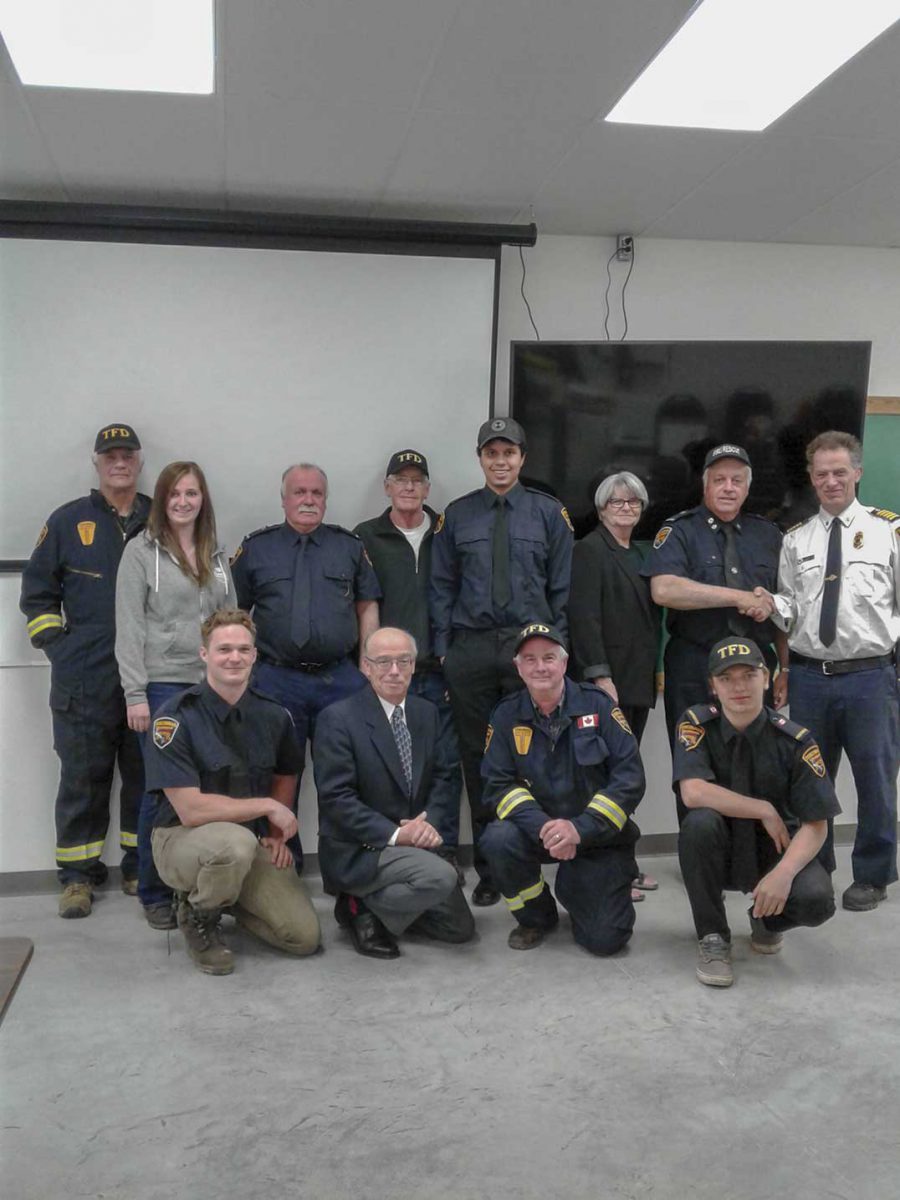 The fire chief says training sessions have recently increased from a biweekly schedule to weekly in order to get the crews ready for the new regulations.

“It’ll be great for their training facility,” says Mr. Smith. “In today’s day and age everything’s digital so everybody needs to bring everything up to par.”

This is not the first donation Tehkummah Fire Department has received. Two years ago, says Chief Wilson, the SSFA donated $2,000 towards new digital radios. The full cost to switch to a digital system is about $30,000, a project Chief Wilson says he hopes to have done by next year.

SSFA has also helped provide a projector and screen, a whiteboard and also donated a weight training room in the fire hall.

“They can’t believe it that our little community has up-to-snuff stuff,” says Mr. Brown.

For the past two years, says Chief Wilson, The Expositor Salmon Classic has donated several hundred dollars to the fire department as well.

Robert and Lorna Russell of Tehkummah are big supporters of the fire department as well; Mr. Russell had volunteered to be foreman of the new fire hall construction in 2012 and the couple had contributed $1,000 to help purchase a mini pumper truck this year. SSFA had helped with the remaining costs. This is the second truck they have donated to Tehkummah.

Chief Wilson says he is honoured to have so much support on the Island and extends his most sincere thanks to everyone who has aided the fire department in the past.

“It’s just fantastic to have people in the community like that who are involved and help us out,” he says.

Mr. Smith says this is the first time his company has partnered with the Tehkummah Fire Department, but he has high hopes for the organization.

“They seem to be a very well-organized group of volunteers; I hope everything works out well for them,” he says.