It’s a grim but gripping story—the new book ‘Death and Life of the Great Lakes,’ by Dan Egan, a longtime reporter for the Milwaukee Journal Sentinel. Mr. Egan, whose beat has been Lake Michigan and the other four big lakes connected to it, has twice been a finalist for the Pulitzer Prize for his Great Lakes reporting.

Two hundred years ago the Great Lakes were an astonishing ecological paradise, vast inland seas comprising more than 20 percent of Earth’s fresh water. They were home to a balanced web of life, fine-tuned over ten or more thousand years, that included sturgeon, pike, musky, perch, bass, whitefish, and lake trout. But, for all their beauty and bounty, the Great Lakes were ecologically naïve, meaning that they had evolved, since the retreat of the glaciers, in isolation from the rest of the world’s aquatic environments.

The first people to settle around the Great Lakes lived in harmony with the natural bounty. But then came European settlement and the view that the Lakes were primarily an exploitable economic resource—apparently limitless fishery, advantageous industrial site, convenient sewer, and watery highway into the heart of a continent. 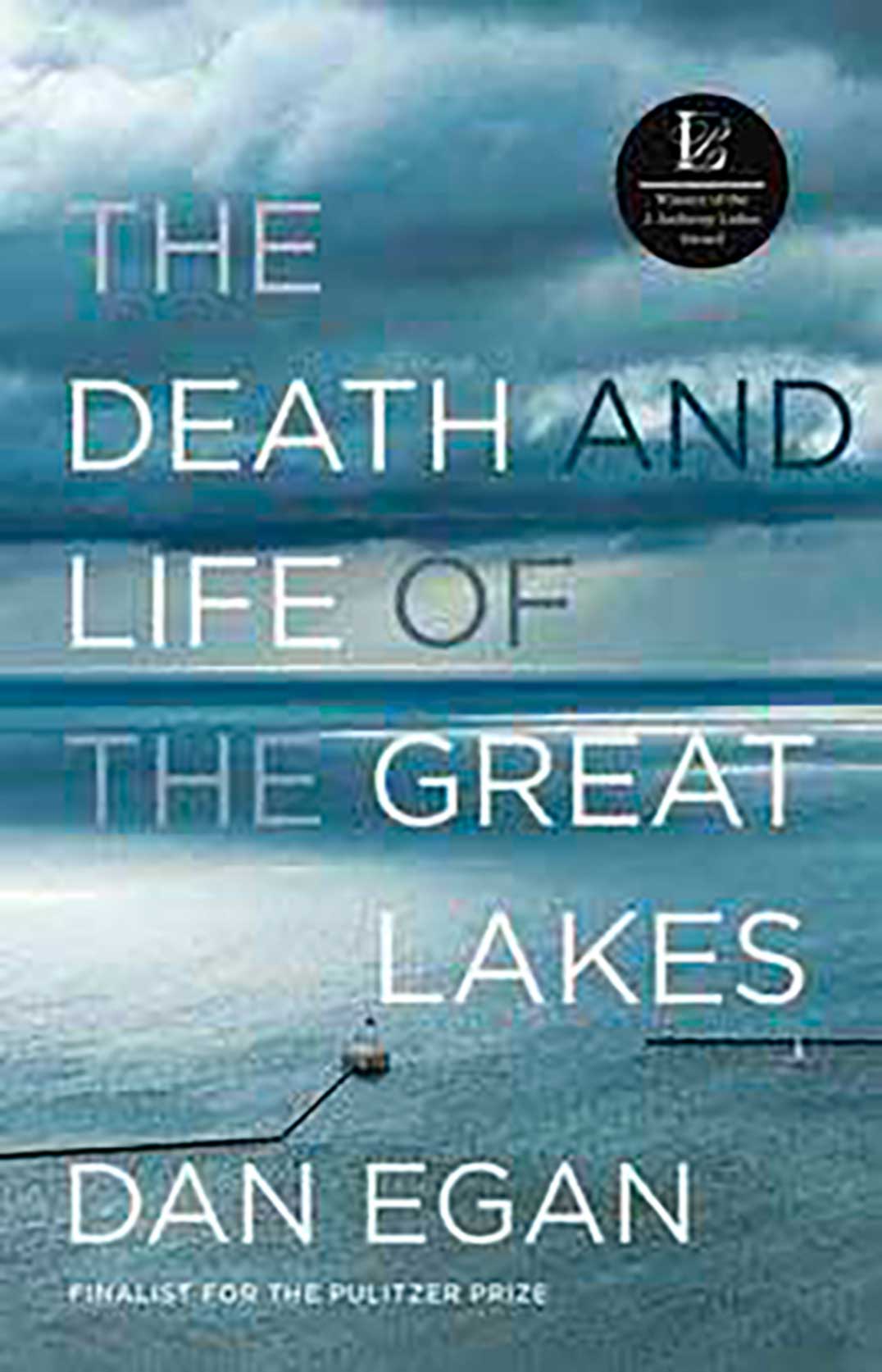 The map of North America “practically taunted the Unites States and Canada” to try connecting the Atlantic Ocean with the Great Lakes. First, in 1825, came the Erie Canal, connecting the Hudson River to Lake Erie. Then in 1829 the Welland Canal, which was built to bypass Niagara Falls. Then, in 1959, the complete St. Lawrence Seaway. All were touted as engineering and economic marvels, sure to bring unprecedented riches to the heartland. Both ended up costing the Great Lakes, and eventually the whole continent, dearly.

Mr. Egan calls the Canal and the Seaway the “Front Door,” a door that has let in some truly obnoxious invaders—among them the sea lamprey and the alewife.

In the 1890s the annual commercial lake trout haul on Lake Michigan was more than 8 million pounds, with similar amounts coming out of Lakes Huron and Superior. In the 1940s the annual harvest of trout and whitefish across the Lakes was somewhere around 100 million pounds. Then, with the arrival of the lamprey, native fish populations crashed. By 1960 the whitefish harvest on Lake Michigan was less than 25,000 pounds and the trout harvest was zero.

With lake trout gone, the invading river herring, or alewife, was free to reproduce, and by 1965 it comprised about 90 percent of the fish mass in Lake Michigan. In July 1967, 30 miles of Illinois shoreline around Chicago was inundated with billions of rotting alewife carcasses, and cleanup required bulldozers and hundreds of million dollars. The whole thing stank.

What happened next is fascinating—and therein lies more of Mr. Egan’s tale—about what happened to and is still happening with the lamprey and the alewife, and about the lake trout and whitefish. On top of that, there’s the whole up-and-down saga of non-native coho and chinook salmon, and how they got here and what has happened since.

Mr. Egan also tells the story of two other invaders, the appalling zebra and quagga mussels, who hitched a ride into the Great Lakes in ocean-going freighter ballast water—creating an extraordinarily expensive and ongoing disaster.

Once he finishes the “Front Door” Mr. Egan takes a look at the “Back Door,” the Chicago Sanitary and Ship canal, opened in 1900 to flush the city’s sewage down to the Mississippi and to provide a navigable waterway between the Great Lakes and the continental interior. This back door presents a number of problems; among them a 1.5 billion gallon a day diversion from the Great Lakes, a path for all the invaders who came in the front door to head out to the western half of North America, and a potential entry point for perhaps the most obnoxious invader of all, the Asian carp.

In some ways ‘The Death and Life of the Great Lakes’ reads like a crime thriller. It’s a story of greed, shortsightedness, incompetence, and “a deficiency of government.” But good things have happened, too. Mr. Egan documents scientific breakthroughs and environmental heroes, “stutter steps [forward} and stumbles backward.”

It may be possible to restore the Great Lakes to some kind of ecological balance and to protect them from myriad threats. But the future remains uncertain. Untreated ballast water can still make it into the Lakes bringing with it the potential for dangerous additions to the already present 186 invasive species. Asian carp are knocking hard on the “back door,” and the Trump administration has slowed if not stopped efforts to strengthen defenses. The St. Clair River continues to roar. Waukesha is the first diversion under the Great Lakes Compact.

Our idea of the Great Lakes does seem to be changing, however—we seem to be moving from a mindset of exploitation to one of restoration and preservation. Mr. Egan says: a “12 year-old, you see, is perhaps the best hope the lakes have to recover from two centuries of over-fishing, over-polluting, and over-prioritizing navigation: almost every person I’ve ever talked to who cares anything about the lakes and the rivers that feed them does so because they have a childhood story about catching the fish that swim in them.”

Those of us who live on or visit the largest freshwater island in the world certainly have many such stories. And we will almost certainly find ‘The Death and Life of The Great Lakes’ a great read.

Title: The Death and Life of the Great Lakes

EDITOR’S NOTE: Jim Nies resides in Wisconsin and Manitoulin and is a passionate defender of the Great Lakes on both sides of the border.