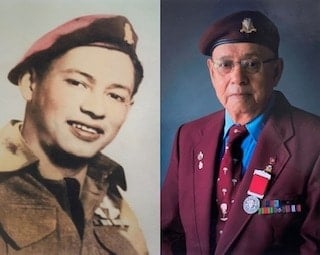 DONALD JOSEPH FISHER
“SCOTTY”
June 18, 1926 – February 27, 2021
It is with heartfelt sadness that we announce the passing of our father Donald J. (Scotty) Fisher. Donald passed away peacefully at the age of 94. Donald was the son of the late Dominic and Joyce Odjig. He is predeceased by beloved wife Rosemary Fisher (Peltier), 1969 and life-long partner Mary Agnes Trudeau (Lor), 2019. Survived by his children Rick Fisher (Odjig), Allison Fisher, Mike Odjig (Angel), Donald Jr. (predeceased), Stephen Odjig (Sarah), Robin Cooper (Tom), Raymond Trudeau (Dawn) and Robert Trudeau (Lynda). Predeceased by siblings Daphne, Winnie, Stanley, Lena, Lorraine, Rita and Rose Marie. Survived by siblings Franklin, Marcella, Wilfred, Patsy, Ronnie, Gordie and Clayton. Also survived by many grandchildren, great-grandchildren and one great-great grandchild. Donald was born and raised on the Odjig farm in Wiikwemkoong in 1926. He left home at the tender age of 14 to work at a lumber camp. It was during this time when he enlisted, with his friend John Mandamin, to fight for his country. He volunteered to join the 1st Canadian Paratroop Battalion. With the ending of WW2, Donald began his 27 year chief engineering career shipping iron ore on the Great Lakes, a transport line that provided sustenance and service to communities surrounding it. Upon the passing of his wife Rosemary (Peltier), he then retired and returned home to raise his family. Donald served as Recreation Director for a few years before he embarked upon his next career as a local government advisor with the then Department of Indian Affairs for 17 years. Donald also served as Band councillor for 16 years. Life was not all work and no play for Donald. His passion for community and sport was evident. He coached hockey teams for many years, and played and organized blooper ball tournaments. He was often seen jogging along the roads of
Wiikwemkoong and was a regular participant in the annual Wiky 10 km Road Race. If Donald wasn’t coaching, jogging or playing ball, Don was on the golf course. His pride and joy was playing the links on our community golf course, Rainbow Ridge Golf Course. Donald was a traveller and embraced warm southern climates. His travels took him to far off places such as Barbados, Fiji, New Zealand, Mexico and Hawaii before becoming a regular “snowbird” to Florida. Donald was a people person and loved to gather with family and friends and share a good laugh and joke. He knew that laughter was a medicine and was happy to take his dose whenever he could. He lived his life showing us that giving of oneself in service of the community can be joyous and lighthearted. To honour his wishes, there will be no wake or funeral service. A celebration of life will take place June 18, 2021 at the Rainbow Ridge Golf Course in honour of his 95th birthday. Our family expresses great gratitude to the Wiikwemkoong Nursing Home who provided great quality of care and comfort for Donald during his stay. We will all miss him dearly but his spirit will live on and we know Donald would want everyone to have a drink and share a good joke in his memory.