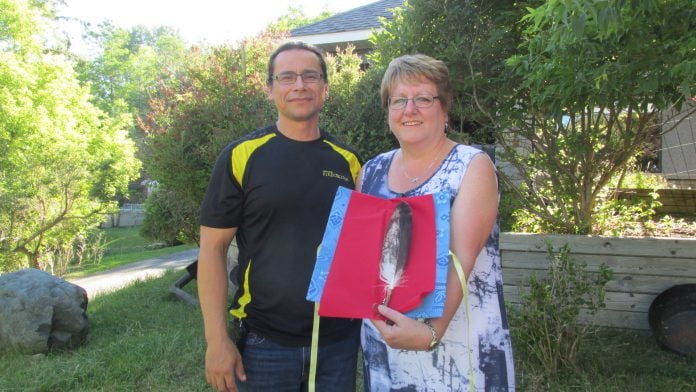 The eagle feather was presented to Barb Middaugh, supervisor of court operations at the Gore Bay Courthouse, who will be the caretaker of the eagle feather. The feather will be made available to First Nations people who come to court at this location.

Ms. Middaugh offered a gift of tobacco to the Justice Program members prior to the ceremony commencing, asking them for their guidance and assistance with the ceremony.

The ceremony was held in a circle format, with representatives of the court staff from both on the Island and off, First Nations court workers, Crown Attorneys and the OPP.  Also attending were Regional Senior Justice Robbie Gordon, Justice Kurke, Justice Del Frate, Justice Gauthier, Justice Christie and Justice of the Peace Hayden.
Lynn McGregor, who is a Native court worker on the Island, expressed that having the eagle feather available to First Nations people would enhance the relationship between them and the courts.

Ms. McGregor explained that in the traditional court system there are a lot of things foreign to First Nations people and sometimes they are so stressed out when they come to Gore Bay but the court staff work with them. Ms. McGregor expressed appreciation for everyone being present at the circle.

Kevin Lyle, manager of court operations for Sudbury and Manitoulin, expressed that it was a privilege to be in attendance and that the court is fortunate to be gifted an eagle feather. He said Ms. Middaugh will be the caretaker of the eagle feather and felt that she would carry out this responsibility with respect.

Mr. Fox noted that there would be a smudging during the ceremony and taking part in the ceremony was Jean McGregor Andrews and Marilyn Debassige, members of the Justice Program. Smudging helps a person operate from their centre, he shared. At the closing of the ceremony everyone had the opportunity to share their thoughts.

Jean McGregor Andrews presented the opening prayer, giving thanks to the spirit for the beautiful day and gift of all people and their ancestors, asking them to “come with us, guide us and share with us.”

Ms. Debassige shared that when a First Nations person holds an eagle feather in their hand they can’t tell lies, they can only tell the truth and people speak from the heart. The eagle feather has travelled far today and this will continue to nurture the relationships we are building today.

The ceremony was emotionally profound for everyone involved.

Mr. Fox passed the eagle feather to Ms. Middaugh as caretaker of the feather at the conclusion of the ceremony.

Following the ceremony a feast was held inside the building.