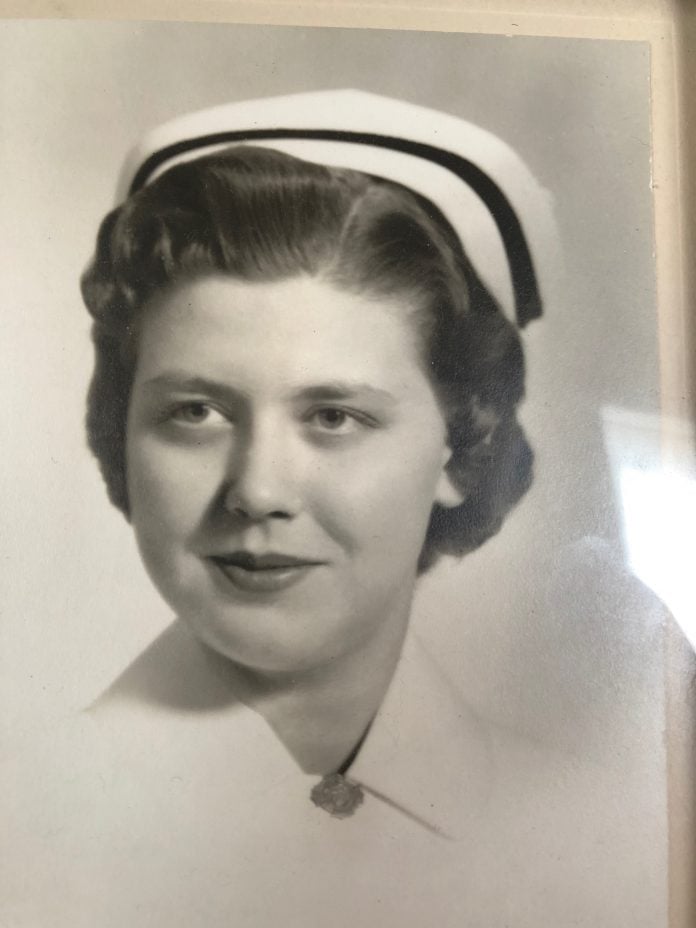 EDNA ROSE “MARIE” FOSTER
March 1, 1935 – July 2, 2020
Edna Rose “Marie” Foster passed away peacefully at Health Sciences North in Sudbury on July 2, 2020 with family by her side. She is survived by her loving husband Joe of 64 years and their seven children, Donna Noble (Brian), Bob (Donna), Diane Riching (Mike), Richard (Karen), Yvonne Bailey (Kevin), Bill and Denise Kilmartin (Mike); 13 grandchildren and 18 great-grandchildren. Also survived by sister Judy Spooner and brother-in-law Tom Foster (Joyce). Predeceased by her sister Yvonne Skinner and brother Jim Skinner and sisters-in-law Elaine McCauly (Gerald), Vivian McKay (Reg) and Fledda Ryder (Bill). Marie was born in Camden East, Ontario on March 1, 1935 to Merril Skinner and Alma (Bauder).She lost her mother at the age of nine years old. Her father was in the military and so she was sent to live with her Aunt Edna whom she loved dearly. Marie was raised with her cousins, Bob, Raymond and Alma who became her adopted family. She eventually attended nursing school at St Joseph’s Hospital School of Nursing in Toronto and graduated as a registered nurse in 1956. Marie and Joe were married later that year. Life was busy as she nursed in different hospitals in Toronto and Shelburne. In 1970, with six children in tow, they moved to Manitoulin Island where Joe had been raised. Marie worked hard keeping house and raising her large family. She eventually became employed at the Manitoulin Lodge in Gore Bay in 1977 where she was highly respected by management, colleagues and residents alike. She adhered to her past professional training whereby everyone was treated with respect and dignity. She inspired several staff members to follow in her footsteps and become professional nurses. Later in her career, Marie travelled across Northern Ontario doing Nursing Home accreditations. After retirement in 2000 she was appointed to sit on the Manitoulin Manor Board for several years. She also taught a Health Care Aid (PSW) course within the nursing home environment. Marie was the best cook ever and her pies and pastries were appreciated and sought after by everyone. She was a consummate reader and always kept herself informed as to world events. She adored her little dog Rosie, who was her constant companion. In lieu of flowers, donations can be made to Manitoulin Lodge Volunteer Programme, Manitoulin Pet Rescue, and the Gore Bay Medical Centre. The family wishes to extend their deepest gratitude to Drs. Hamilton and McCrae for their years of trusted care. Funeral arrangements entrusted to Simpson Funeral Home, Gore Bay.